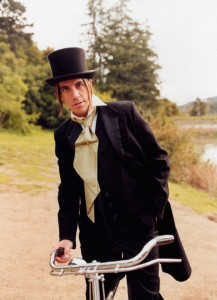 A new magazine scan with full transcript has been added of A.P. (Alternative Press) Magazine for July 1999 featuring the iconic photos by Stephen Sticker of Anthony Kiedis and the other members of the Red Hot Chili Peppers dressed in period outfits with tailed suits, top hats and walking canes! The accompanying interview is also really well written and informative; it talks about the band re-forming with John Frusciante to record Californication and the issues they had over the preceding years, all interspersed with quotes from the band and the photos. Here’s an extract:

The Chili Peppers’ rehearsal space sits on an innocuous block in Hollywood: in front of it is a theater in need of a paint job. The large, air-conditioned room contains two back seats from a car, complete with seat belts, so visitors can watch the Red Hots drive. Christmas lights decorate a spiral staircase. An image of a duck graced with a halo hangs above Smith’s drum kit.

The Chili Peppers often face one another while they rehearse. They look inward, gathered like the four points of a diamond, and feed off one another’s energy as the music booms and segues into extended jams. They occasionally turn to face the car seat, but always revert to their tight collective.

They talk little between songs, making only minor comments about intricacies they hear in the music or what songs they want to play next. As the songs boil, Smith slams the skins with ferocious, Mike Tyson-like swings. Flea bounces and slap-plucks his silver bass while working the effects pedals at the foot of his microphone.

Kiedis is all rock-star swagger. He clutches the microphone stand in his right fist even when not singing. He quickly removes his shirt mid-jam to reveal a cut torso and numerous tattoos, including one of an Aztec-style mask that spreads across his shoulder blades. Cupping a cigarette in his left hand, he unleashes his trademark staccato rap and rocks back and forth, occasionally raising his left knee in a half-kick.