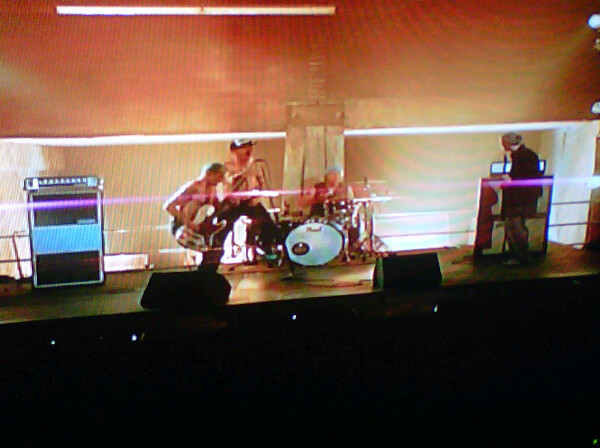 Photo of recording of new RHCP video by someone on set

The new video for RHCP’s first single from I’m With You, The Adventures of Rain Dance Maggie’ is being produced by Kreayshawn; she talks about it in an MTV interview and Anthony Kiedis is mentioned:

When MTV News first broke the news that up-and-coming “Gucci Gucci” rapper Kreayshawn had been tapped to direct the Red Hot Chili Peppers’ “The Adventures of Rain Dance Maggie” video, the reaction from most seemed to be “her?” Yes, despite the fact that she went to The Berkeley Digital Film Institute — and has directed clips for the likes of Lil B — most couldn’t believe that the Chili Peppers had gone with the Bay Area Based Goddess for the first video from their much-anticipated I’m With You album. But RHCP fans weren’t the only ones feeling that way: Turns out Kreayshawn couldn’t believe it either.

“My manager hit me up. He was like, ‘Oh, Warner is looking for somebody to direct the new Red Hot Chili Peppers video. They want you to do a treatment.’ So at that time, I was like, ‘Oh sh–! I’m about to do it,‘ ” Kreayshawn told MTV News on the set of the “Rain Dance” video earlier this week. “Later, I found out that [my treatment] was picked out of a whole bunch of them. … So I was like, ‘Oh, that makes it even crazier.‘ I went to film school and stuff, but, like, I never thought it was going to translate into something this big.”

Though she was overwhelmed, Kreayshawn said any doubts she had disappeared after speaking with RHCP frontman Anthony Kiedis and discovering that the two shared similar visions for the clip.

“I talked to Anthony a couple times, and he was like, ‘I want to do a couple changes to the video,’ but all the changes he had were, like, stuff we were already doing with the video, like slow-motion and stuff. So I was like, ‘We’re dialed in,’ ” she said. “Everyone was completely ready and they came here, they’re excited, which makes me even happier. … There’s a good vibe everywhere.”

Of course, while she was more than willing to speak about the vibe of the video, Kreayshawn didn’t want to reveal much about the actual plot — though she did say that, well, certain groups of the Chili Peppers’ fanbase will definitely be happy with the end result.

“It’s got that organic feel, but it still gives the band a great shine and they look f—ing awesome,” she laughed. “They are looking off the chain, man. Anthony’s in there looking like a swimsuit model.”  Source