This is from NME’s online site (and we really like this article for some reason :D) 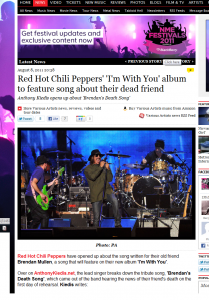 Red Hot Chili Peppers have opened up about the song written for their old friendBrendan Mullen, a song that will feature on their new album ‘I’m With You’.

Over on AnthonyKiedis.net, the lead singer breaks down the tribute song, ‘Brendan’s Death Song’, which came out of the band hearing the news of their friend’s death on the first day of rehearsal. Kiedis writes:

Brendan happened to die on the very first day we were to rehearse with Josh Klinghoffer. When I got to rehearsal I delivered the news to my band that we just lost this beautiful person. And then we started playing without really talking.

Speaking to the LA Times, new guitaristKlinghoffer remembers the news coming through on his first day. He describes it as, “Sort of a sad hello. Everybody lost a good friend.”

Lyrics for the song include the lament, “Let me live, so when it’s time to die, even The Reaper cries.”

Bredan Mullen was a British writer and a rock club impresario who helped give the band their first break in 1983. He was working on a biography with Red Hot Chili Pepperswhen he died.

Thanks to HotRedChiliPeppers for the heads up on this 🙂