I’ve just posted a full overview of this on my other website, The Chili Source, for anyone who’s interested in the whole thing 🙂 But for those of you who didn’t see the film and who are only interested in the Anthony Kiedis bits, here’s a summary of them:

The movie started with various random (mostly black & white) photo shots of scenes & brief videos taken from the concert; that lasted for about 20 minutes. As it got closer to show time, the warm up changed to clips of the official RHCP video that was released
(added below) talking about Josh Klinghoffer joining the band, etc. cut in with
‘exclusive cinema’ clips of the band backstage talking about the show to follow e.g. Anthony Kiedis explained that they might change the album playing order and have ‘Monarchy of Roses’ followed by ‘Dance, Dance, Dance’ (but that wasn’t the case in the end). Anthony Kiedis seemed quite tense and a bit apprehensive about the whole thing.

Official video used in the movie:

Chad, Josh and Flea came onstage first and started to jam but were soon followed
by Anthony wearing black trousers and a very cool black tailed jacket that had multi-coloured silk sections (white background with mostly red and blue abstract streaks on it) but that was soon removed and he played bare-chested for the remainder of the set. 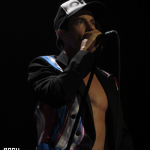 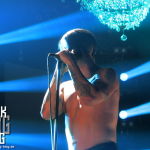 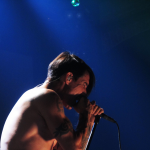 Shots throughout the concert were mostly of the band members but there were some crowd shots and other shots showing people on the edge of the stage- Anthony’s son, Everly Bear, was seen really briefly at one point!

They played through the whole of ‘I’m With You’ in order with the omission of ‘Even You Brutus.’ Flea seemed to do most of the talking to the audience but Anthony Kiedis also said some things too e.g. he name-checked his mum (“Hello to my dear mother”)  which was really sweet; he also said something about knowing one person at least who would be watching the show and then he asked if Cassia (?) would be watching and said he didn’t know how he felt about that (it looked like something had been said to him but we couldn’t hear what it was). I’m trying to remember what was said; I did start to take notes but
gave up as it was too dark in the cinema to write! Anthony and Flea were joking about Flea menstruating and being the only guy to have periods after Flea asked for a pause in the concert as he had bad cramps and the last band chat (mostly Anthony and Flea) was about the time running out and the 90 minutes nearly being over and that they were grains of sand in an hour glass that was running out.

The band was so dynamic and into the whole thing- you could sense the love and enthusiasm they had for each other, the new songs and playing together. Anthonyreally seemed to be really concentrating on the vocals but in a good way but he was dancing around madly at times too.

Videos and lots of photos HERE

Many thanks to Shalhevet for finding some research and to Rita for confirming some things from the movie for me and reading through the draft version!

2 Responses to Anthony Kiedis & RHCP I’m With You Movie