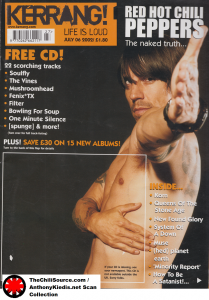 I’ve just added better quality of scans of this magazine (I thought it was on here already but couldn’t find it so I made a new post- it might have just been on TheChiliSource) with the scans using my new scanner.

Here’s an extract from the interview:

This is the story of how the Red Hot Chili Peppers refused to give it
away.

SEVENTY-NINE hours previously, at 2pm on a Tuesday afternoon, it’s press hell
in a heavenly West London hotel. The four members of the band – vocalist Anthony
Kiedis, bassist Flea, guitarist John Frusciante and drummer Chad Smith – are
each sitting in one of four suites on the second floor of the Knightsbridge
Mandarin Hotel, overlooking the capital’s Royal Parks, downwind from Harrods. In
a separate room are the journalists, waiting and fidgeting, smoking but not
talking, as a representative of the band’s management firm, Q-Prime, cues up ‘By
the Way’, the band’s new album – their eighth – on the hotel room stereo. Given
that the record is still shrouded in secrecy and security, we’re asked if any of
us have our tape recorders switched on. It’s difficult not to laugh and applaud
in squeals of delight.

But then again, it’s also difficult not to be struck by at least some sense
of occasion, There are few groups around today who are as storied as the Red Hot
Chili Peppers. Not only have they made music that has been loved and adored over
the years, but they’ve done so very much on their own terms, at their own pace
and in their own style. They have almost split on a number of occasions –
usually following the departure, or the death, of one guitarist or another – but
somehow they never quite made it to the crematorium. Instead they moved on, and
they got better. And, as ‘By The Way’ shows, they’re better now than they have
ever been.

“There have been some press-worthy moments that people like to get into with
our band,” says Anthony Kiedis. “You know, people dying and all of that. But
it’s all part of the picture. I can’t say that I’m at all grateful for having
lost one of my friends (Hillel Slovak, the band’s original guitarist, who died
of a heroin overdose) early on in the career of this band. But in some ways I am
grateful for the struggles that we’ve gone through. It was the greatest series
of lessons that I could have ever come across.”

Full colour scans of the article and transcript HERE

Several other new scans have been added to the collection and a couple of posts updated with better quality scans. Here are some of the new ones:

Kerrang! 8 pages of tour photos pull out from 1999

Local newspaper overview of RHCP in advance of a concert but there’s a great pic of Anthony Kiedis in it; from 2006