I’ve just got a copy of the edition of Guitar World featuring the interview with Anthony Kiedis & Josh Klinghoffer (both featured on the cover). The interview is very detailed,  well written and has a few unique photographs of Anthony Kiedis that were commissioned for the article. 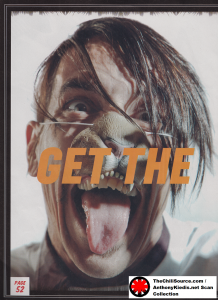 Kiedis himself is quite a sight, tricked out in a manner that suggests the early years of the 20th century-waistcoat, shirt collar buttoned all the way up, an abbreviated mustache and hair combed over one eye, making him look, oddly enough, like Adolf Hitler. He’s accompanied by the Red Hot Chili Peppers’ newest guitar player, Josh Klinghoffer. The two men are a study in contrasts. Compact and talkative, Anthony Kiedis has obviously dressed up for the day’s photo shoot. Josh Klinghoffer-tall, slouchy, unshaven and so painfully quiet it can be physically exhausting to draw a few sentences from him-is dressed down in formless trousers, a T-shirt and windbreaker. Anthony Kiedis and Josh Klinghoffer share a quick laugh over their contrasting sartorial choices, then fall to quietly examining the curious selection of funky old guitars that Josh Klinghoffer has brought down for the shoot: a yellow Harmony Stratotone Newport from 1952, an equally archaic Silvertone, and an Airline with a broken jack.

Josh Klinghoffer had a key role in making the Red Hot Chili Peppers’ new album, I’m With You, a standout disc that marks an intriguing new chapter in the band’s long creative history. It’s the first RHCP album in 12 years without the band’s longstanding guitarist John Frusciante, who left in 2009 to pursue new musical interests. Some wondered how the group would fare without John Frusciante’s wild imagination and well-honed song craft. But Chili Peppers new and old have acquitted themselves beautifully.

“I am the pathetic optimist in the band,” Anthony Kiedis says. “I just naturally think that things are going to go swimmingly well. That’s my department. Even when we were strung out and going down the drain faster than the blink of an eye, I felt like it’s all gonna be okay. It’s gonna work out.”

This entry was posted in Anthony Kiedis, I'm With You, Red Hot Chili Peppers, RHCP. Bookmark the permalink.