Exclusive Photos of Anthony Kiedis Live at 02 Arena With RHCP 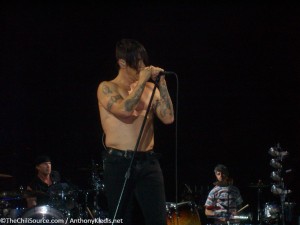 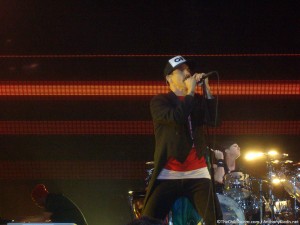 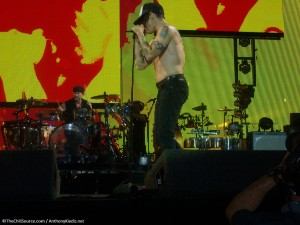 I was at the O2 Arena, London, last night (November 7th 2011) for the Red Hot Chili Peppers’ concert and after queuing for over 10 hours, I got a front row spot right in front of Anthony Kiedis himself! I’ve got the bruises, cuts, etc. to prove the fact I stuck it out – and a set list that I got as a result of a security guard trying to make up for the fact he dropped somebody directly on my head!

It was pretty crazy; I was texting the song titles to a friend to post for me as each song was played while trying to take photos in the crowd frenzy at the front of stage; I was having to hang onto the camera & take the photos while trying to brace myself from being slammed into the barrier, so it was hard to frame the pictures, but I managed to take about 200 photos which I’ve edited, sorted and the best have now been uploaded. My proper camera wouldn’t have been allowed in so I borrowed a camera and literally took photos until the battery died. A couple of photos were also taken using my iPhone; they are a bit fuzzy but I thought I’d add the few best ones as they show slightly different shots/angles to the rest.

(BTW the are a couple headless photos of AK focusing on his lower torso but it honestly wasn’t deliberate! I got knocked as I took the photo!)

A review is to follow but I’ve travelled home today and have spent the whole evening sorting, editing and uploading the photos I took as I know people are asking for them. Enjoy 😀

For those interested there is a dedicated RHCP O2 Arena 7th November 2011 photo gallery  on TheChiliSource.