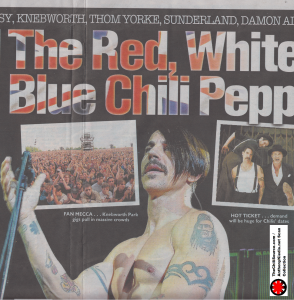 Anthony Kiedis has been interviewed with Flea from RHCP in an interview published by The Sun (UK) newspaper today. Anthony talks about art, ‘I’m With You’ and the new Red Hot Chili Peppers tour dates for the UK in June 2012. Here’s an extract:

But the American rock giants, who have a huge affinity with the UK, have made a few costly mistakes along the way because of their dedication to performing live.

Frontman Anthony knocked back the chance to invest in superstar graffiti artist Banksy, who now sells his work for millions, because he was “in tour mode”.

Speaking in an exclusive chat with The Sun he told how he had kicked himself ever since about the decision.

He said: “I met Banksy years ago and made the mistake of not buying his art when I met him.

“It was offered to me. I was in the tour mode of, ‘Got to get to soundcheck’ and whatever.

“But I appreciate it nevertheless and I’m happy for him and the wave that he’s created.

“It could have been a big investment, but these things happen.