Anthony Kiedis Interview on RHCP being Inducted into Hall of Fame

Red Hot Chili Peppers are to be inducted into the Rock N Roll Hall of Fame in
2012! They will be joining several other groups including the Beastie Boys and
Guns N’ Roses. 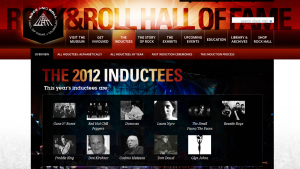 Anthony Kiedis was interviewed by Rolling Stone shortly after he
found out:

How is the tour going?
It’s going really good. It’s really fun. My only challenge these days is that I have a broken toe and a torn calf muscle. I have to kind of tape up and strap up. In the big picture, it’s nothing to complain about.

Tell me your first reaction to hearing that you made it into the Hall of Fame.
I called my dad. I told him that he couldn’t say anything because it hadn’t been publicly announced yet. I know my dad is a big Internet freak, and he’s been known to be a Wikileaker. I was like, “Dad, you and I are blood. I’m going to tell you something, but you can’t tell anybody.” I guess it’s just something that you want to share with the people that you’re closest to, like family and longtime friends. My dad cried.

Did you get emotional?
The most emotional part for me was thinking about Hillel Slovak. That was where it got me. I felt very good about it, but I felt very much like our work has only just begun. Now that we’ve got Josh in the band, we have a chance to make some great records over the next few years. But there was something about going back and thinking about something that we started in a living room with Hillel Slovak. Because he’s no longer with us, it seemed emotional and beautiful. It’s really kind of his induction that I’m most excited about. He’s a beautiful person that picked up a guitar in the 1970s and didn’t make it out of the 1980s, and he is getting honored for his beauty.