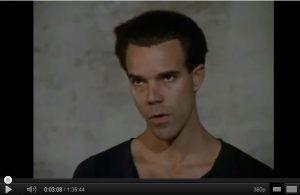 In case you don’t know, Blackie Dammett is the father of Anthony Kiedis. He is an accomplished actor with many credits to his name & he used to run the RHCP fanclub; he is now retired from both and currently paints and is writing his autobiography. It was his birthday this week and a friend of mine put together a video tribute to him. It features editied clips of Blackie Dammett in his acting roles, plus examples of his art work. I know this is strickly nothing to do with Anthony Kiedis as such, but I’m adding it in case anyone would like to find out more about his dad as it’s such a brilliant video and a great source of information- as well as being such a lovely way of saying happy birthday to the man who has done so much for the RHCP community. Enjoy 🙂

This entry was posted in Anthony Kiedis, Family. Bookmark the permalink.