The Grand Rapids native’s sometimes-unrestrained rise to stardom began when he helped form funk-rock’s Red Hot Chili Peppers in the 1980s, a band that has since sold 70 million albums worldwide and won seven Grammy Awards. The band, to be inducted into the Rock and Roll Hall of Fame next year, is now touring behind its latest album, “I’m With You,” which also has been nominated for a Grammy.

Q: The Red Hot Chili Peppers soared back to international prominence in 2011. What was your personal or professional highlight?

A: Thank you for the flattering usage of the word “soaring” as it pertains to my band. Professionally speaking, releasing our record, “I’m With You,” was the highlight and something like giving birth after a 24-month pregnancy. We were dying to get it out.

Q: What was your lowlight?

A: Ah, what would life and its highlights be without a few lowlights? Honestly, I have little or nothing to complain about. My personal setbacks … are nothing to what I see around me. It’s hard to watch friends and family struggle with health or other spiritual issues, but it’s got to be there for a reason. Lowlights are the great catalyst for growth. … (NBA’s Los Angeles) Lakers losing to the (Dallas) Mavericks in the Western Conference finals was a lowlight.

Q: What will be the headline for you a year from now? 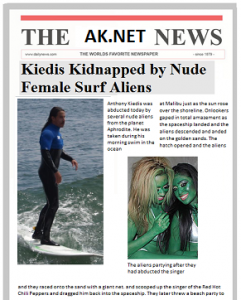 Q: If you could visit only one place in Michigan, where would you go?

A: Mom’s kitchen. An old dirt road along the shores of Lake Michigan. The smell of pine needles baking on the sandy shores of some forgotten bend in a faraway creek.

Q: If you could never visit Michigan again, what food or restaurant would you miss the most?

A: Ha, ha. I don’t associate Michigan with great restaurant food. Boo, hiss. I like the organic blueberries from various farmers markets.

Q: As you travel around the country, what misconception do you hear most about Michigan, and how do you respond?

A: I feel like Michigan has a pretty good reputation around the country. It definitely does in California. People may not realize just how much natural beauty the Mighty Mitten holds, but that’s part of Michigan’s charm. It’s not an over-populated mess.

Q: Will the Red Hot Chili Peppers’ tour make a stop in your hometown?

A: Hard to imagine that we would not be playing in Grand Rapids come 2012, but I haven’t actually seen it on the schedule. Could be an arena-availability thing. Fingers crossed for a Grand Rapids show. Have a great new year, all ye Michiganders.