After weeks of rumours, it has now been confirmed that the Red Hot Chili Peppers will be playing a concert in Israel next summer which is great news for all of our Israeli friends who have been waiting a very long time to see Anthony Kiedis and RHCP.

It’s official: Ten years after the painful cancellation, the band “Red Hot Chili Peppers’ first show in Israel on September 10, 2012, and stand on the stage of the Yarkon Park in Tel – Aviv. In recent weeks we have reported on the contacts of producer Shuki Weiss bringing Israel and tonight (Thursday) are exposed to all information and ticket sales launched.

The sale will be held at the ticket office “Castle”, when the price of a limited number of presale tickets will be 320 dollars. Then he will climb up to -390 dollars per ticket. In addition, like many previous instances, will have the option to pay a “gold ring” in the region close to the stage in 750 shekels, and a VIP card, which includes seating Invision Power Board with Joshua Gardens parking and refreshments, at 1,200 dollars.

Source and original post (sorry, this is a Google translation) 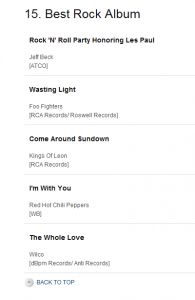 Red Hot Chili Peppers have received a nomination in the best rock album category for I’m With You in the 2011 Grammy nominations. Source

The official RHCP website has launched a competition on their Facebook page whereby sharing the new Red Hot Chili Peppers video for Monarchy of Roses enters you with a chance to win one of 15 posters signed by Anthony Kiedis and the rest of the band:

Want to win an “I’m With You” poster signed by the band? Just share the new Monarchy Of Roses video to all your Facebook friends now, and 15 winners will be contacted at random by Tuesday, December 6th to win!

Thank you to Shalhevet, Ana and Anna for info and links.