Anthony Kiedis at ‘The Announcement’ Premier

Anthony Kiedis was present at the premier private screening of  ‘The Announcement’ about Earvin “Magic” Johnson on March 6th; photos of the event have recently come out.

Magic Johnson, legendary Lakers’ player, was diagnosed with HIV back in 1991 and the film looks at the announcement of that from a variety of perspectives including Johnson’s own. The documentary was shown at a private screening before being later shown to the public on ESPN last Sunday. Johnson is well known to be a sporting hero of Anthony Kiedis. 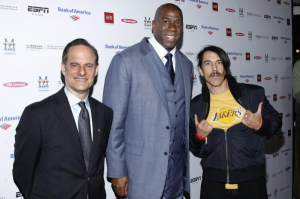 This entry was posted in Anthony Kiedis, LA Lakers. Bookmark the permalink.