I was trawling through eBay the other day in my search for back issue magazines featuring RHCP and I saw a post for some photos from the Chili Peppers’ concert at the Ricoh Arena, Coventry back in July 2006. I was at that concert (it was the first time I saw the band) so I treated myself to the photos as a keepsake (it was also the last concert I went to with my late husband so now it has extra significance). They arrived the other day and there were some great photos included in the pack so if anyone fancies a blast from the past and wants to get their own copies 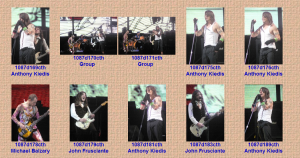