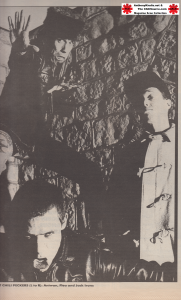 I’m trying to play catch up here and one of the things I’ve done is to scan and upload some more back issue magazines featuring the Chili Peppers that I’ve recently added to my collection; so here are the latest offerings 🙂

Then, in the middle of the posh hotel bar, he stands up turns around and drops his trousers.  A lot of fidgety hand movements around his groin area follows. The he swings around, trousers and pants around the knees, his arse smiling to everyone present and both arms open wide in declaration.

There’s a forest of black tangled pubes looking me in the eye as Antwan’s kingsize whopper hangs loosely, snug in its white sock. A few heads turn. I break down in laughter and Antwan scoops them all up and puts ‘em away again.

This is taken from a very early RHCP interview in Sounds magazine back in 1988 where mostly Anthony Kiedis (Flea does add a few comments) discusses the now infamous sock wearing routine and elaborates in detail on the song ‘Party on Your Pussy’ and why it isn’t sexist.

It’s Anthony’s birthday, and when a female exotic dancer chickens out the last second, Pearl Jam roadies John and Eric step in to fill her shoes, so to speak! The Chili Peppers come on for an encore, and when Flea announces Anthony’s birthday to the crowd, the singer hides shyly behind a stack of speakers aware that something’s up.

As a gift offering, Vedder clad in nothing but a sock, is carried on stage by Smashing Pumpkins’ guitarist James Iha and drummer Jimmy Chamberlin, while John and Eric try their hand at female ‘exotic’ dancing in clothes borrowed from Pumpkins blonde bass gal D’Arcy.

The circus soon unrolls a sign which the ever-creative Vedder spent most of the night before making. It reads ‘Happy B-Day Swan’ in reference to Anthony’s alter ego ‘Antwan the Swan’. The birthday boy looks a little bemused.