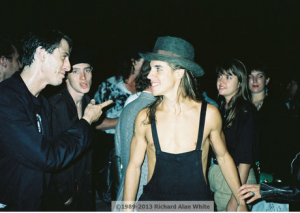 If anyone is interested, Richard Alan White has contacted me to say he is selling some of his photographs of the Red Hot Chili Peppers, including Anthony Kiedis, taken at the Mother’s Milk aftershow party on the top of the West Hollywood Hyatt Hotel on Sunset Blvd, back in September (22nd) 1989.

The photos have been locked in a safe for the past 25 years and were recently uncovered by Richard.  A double set prints were originally made (some of the original photos were given to Anthony) and then the negatives were put into a vault and basically forgotten about until recently when they were ‘re-discovered’.

If you are interested in finding out any more details such as prices, sizes, print runs and to see more of the images for sale, further information can be found HERE (Please note; these photos are initially for sale for three days only)

UPDATE: if anyone is interested, these photos will be going  back on sale on a  regular basis (every three days?) so if you’ve missed them and want to buy them, just check back on the site to see if they’ve been re-listed.