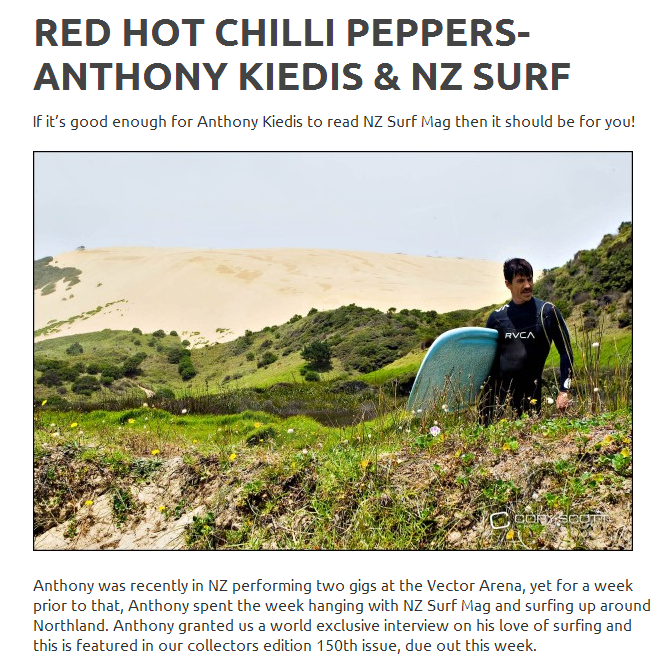 Anthony Kiedis is to feature in the 150th edition of a New Zealand surfing magazine called NZ Surf Mag. More details and an order link (hard copy in New Zealand and digital copy for rest of the world) can be found HERE

UPDATE: I’ve just downloaded the digital version (if you look around there’s a link to Zinio to download one edition; the price paid apparently varies where you are but it was 6 NZ dollars + tax when I got it just.) The interview is an in-depth surf one with Anthony discussing how he got into surfing, what it means to him and he also talks about how he doesn’t take any unnecessary risks because of wanting to be a father to Everly Bear. He also talks about how he’s now careful about surfing before a show as he hurt himself prior to the New Zealand shows:

What about the risk element involved in surfing; does that ever enter into your mind that it could affect your performance on stage?
Before two days ago, no! I know that surfing involves getting hurt because I get hurt all the time, but I also have this kind of ignorance where I refuse to believe that I could ever get hurt bad enough so that I couldn’t do my job, because i never really have…. But then two days ago after being dragged over the rocks at Shippies, I realised WOW, I’m about to start a month long tour of New Zealand, Australia and Africa… and I can barely walk after that injury… and now I kinda have to consider that I can’t surf heavy waves before a tour.
… you know I’ve gotten cuts from fins and all kinds of weird or odd little injuries, but it just seems like a small price to pay for surfing. But getting my pubic bone separated by a giant rock was a whole new level of pain and discomfort that could really mess up the first couple of shows on the tour. I literally got rolled over the rocks and probably did ten flips bouncing off the rocks which were covered in mussels.  Like the worst kind of car crash that you could imagine… as I stood up and realised that my pubic patch was full of blood and my suit was torn, my head was bleeding …”

There are also several really great photos in addition to the written text (it’s about 6 pages long).

Had to copy this as it’s so great:

(I’ve ordered the digital copy but if anyone could send me a hard copy for my collection….! Has to be worth asking! :D)

Many thanks to Shalhevet Dvir for the heads up on this!

This entry was posted in Anthony Kiedis, Surfing/Ocean. Bookmark the permalink.

One Response to Anthony Kiedis in NZ Surf Magazine