The film is based on a memoir by Amy-Jo Albany and looks at the complex relationship between Amy-Jo (Elle Fanning) and her father Joe (John Hawkes), “…a man torn between his musical ambition, his devotion to his teenage daughter, and his suffocating heroin addiction”. The movie is set in 1970s Hollywood.

The film opens in New York on Friday 24th October; more information in the flyer below: 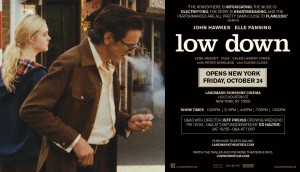