“I remember talking to Flea about him wanting to do a school 15 or 16 years ago in Australia, and I couldn’t tell if he was serious or if he was having a moment,” Kiedis said. “But he was feeling the beauty of kids studying music. We came back to L.A., and he actually got the ball rolling. Source 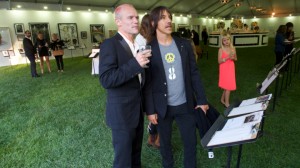 News reports are beginning to come in for the fourth annual fundraiser held at Ron Burkle’s  home for the Silverlake Conservatory of Music. The event raised a staggering $1.25 million for the Conservatory of Music and included performances by Rufus Wainwright and Bruno Mars. Paintings by artists such as Damian Hirst, Raymond Pettibon & Richard Prince (Flea made the winning bid on one of his pieces) were also sold at the event. The event was co-hosted by Anthony and Flea- the other two members of the Red Hot Chili Peppers, Chad Smith and Josh Klinghoffer, were also present.

Read more at Rolling Stone and The Hollywood Reporter

Thanks to Shalhevet for sourcing the Rolling Stone link.