The program from the UCLA Spring Sing 2015 with the page for Anthony Kiedis who was  the 2015 Gershwin Award recipient at the event: 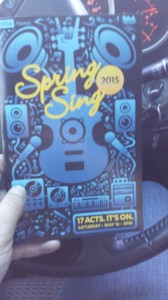 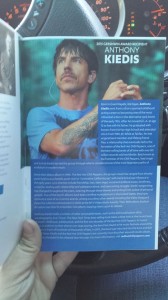 Born in Grand Rapids, Michigan, Anthony Kiedis went from a short-spanned childhood acting career to becoming one of the most influential artists in the alternative rock boom of the early ‘90s. After he moved to L.A. at age 12 to live with his father, he graduated with honors from Fairfax High School and attended UCLA from 1980-81. While at Fairfax, he met original band member and lifelong friend Flea, a relationship that eventually led to the formation of the Red Hot Chili Peppers, one of the best-selling bands of all time with over 80 million records sold worldwide. Best known as the frontman of the Chili Peppers, lead singer and lyricist Kiedis has led the group through what is considered one of the most legendary paths of evolution in modern music.

Since their debut album in 1984, The Red Hot Chili Peppers, the group’s music has ranged from thrashy punk funk to psychedelic punk rock to “ruminative California pop” with more lyrical rap influence in the early years. Lyric themes include friendship, loss, teen angst, social and political issues, loneliness, romance, dealing with relationship and substance abuse, and overcoming struggle. Kiedis’ songwriting has changed throughout the years, weaving through these themes and writing from a place of personal growth. Five of the band’s albums have been certified multiplatinum in the United States; they have received a total of six Grammy awards, among other countless awards including the Video Vanguard Award for Lifetime Achievement in 2000 at the MTV Music Video Awards. Their 2006 album Stadium Arcadium was their fist Number One album, topping the charts upon its release.

Anthony Kiedis holds a number of other achievements, such as the 2004 publication of his autobiography, Scar Tissue. The New York Times best-selling book takes a deep look at the ins and outs of Kiedis’ childhood, adolescence, and the first two decades of the Red Hot Chili Peppers. In recent years, in addition to almost non-stop touring, the band has played at hit music festivals around the country (?)  in front of hundreds of thousands of fans. In 2012, the band was inducted into the Rock and Roll Hall of Fame. Kiedis and the Red Hot Chili Peppers are currently recording their eleventh studio album which is scheduled to be released later this year.

Many thanks to my friend Angra for the photos!