Another brief clip of Anthony Kiedis and Josh Klinghoffer preforming ‘By The Way’ has been posted:

The Daily Bruin is also running a feature saying that the guys played ‘Otherside’, ‘By The Way’ (both confirmed with videos that have been posted) and a cover of “If You Want Me To Stay” by Sly and The Family Stone which hasn’t been confirmed by another source. It also contains a snippet of Anthony’s speech:

Kiedis, the lead singer of the Red Hot Chili Peppers and a political science student at UCLA from 1980 to 1981, was presented with the George and Ira Gershwin Award for Lifetime Musical Achievement. In his acceptance speech, he thanked the UCLA Alumni Association even though he said that receiving awards can be detrimental to inspiration.

“A lot of successful songwriters start off having a great connection to life and the awards start coming and suddenly they have nothing to say,” Kiedis said. “But I am grateful to (the UCLA Alumni Association) for pointing out someone who writes songs.”

After Kiedis’ speech, he brought fellow bandmate and guitarist Klinghoffer on stage to perform Red Hot Chili Peppers songs “Otherside” and “By The Way,” and a cover of “If You Want Me To Stay” by Sly and The Family Stone. Their performance earned a standing ovation from the audience.

Sorry I don’t know the source for this but apparently it’s Anthony receiving his award: 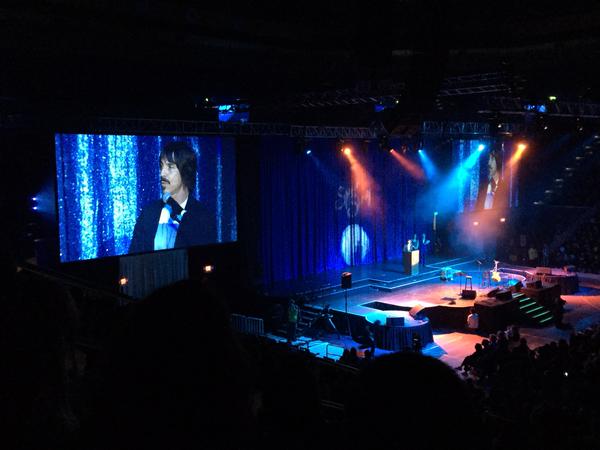