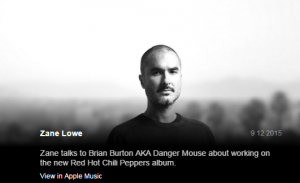 Danger Mouse, who is producing the new Red hot Chili Peppers’ album, was interviewed by British radio presenter, Zane Lowe, and during that interview he made a few comments about the album.

You can hear the snippets about the Chili Peppers’ album HERE. I’ve transcribed most of the interview- the end was them overlapping so I’ve just paraphrased the main parts of it.

Zane Lowe: So you’ve been in the studio. You’ve been working on the Red Hot Chili Peppers’ album.

ZL: I’ve known those guys a long time. I’m sure they won’t mind a few words. How’s that going?

DM: It’s going really, really well. We kinda got really  going with it in September and we’ve been at it since then. I mean it’s lots and lots of music. It’s right up the street, you know, from here so getting to do it in my studio which is always good; for me anyway [laughter]. But it’s been going really well and we really hit it off and I know them too, with Gnarls Barkley , we toured with them for a couple of months so it’s good to work with people you know. And I didn’t know how it was going to work or fit either. Just because they do a very specific thing, but they want to do something different as well and I do like what they do so, I’m just wasn’t sure they’re going to like what I do.

ZL: I’m a lifelong fan of so for me coming back of a…

ZL: You’re welcome. So the Chili peppers too have done very well for themselves [laughs] but you know [laughs] but coming back of such a large body of work last time and then a big break and where they’re at, I can imagine them being in a very open minded place

DM: Yeah,  it has been. It’s all them. They’re just amazing players. The taste in what we’re trying to do …[?]… it’s something where we’re definitely finding the places where it overlaps

ZL: But you’re a drums guy though; I think about you in the terms of the way you always program your drums, and work with drummers, and record with drummers and you have a very unique drum sound, and then you’re working with Chad Smith who is unquestionably, I would say, modern rocks greatest drum powerhouse rock drummer.

ZL: I was gonna say you’ve made a name for yourself processing drums in a way that’s very Danger Mouse

DM: Yeah, it’s different this time but there’s also things I haven’t done as well because of how he plays so I definitely and pleasantly been able to adapt to him too. It’s easier to talk stuff when you’re like, oh there’s this one song here and then we talked that about that so I’m hesitant to get into too much detail because there’s no music…

DM: Well, I was going to keep answering ‘em. You know you’re good at getting stuff out of people.

Many thanks to Milan at RHCP.us for the heads up on this