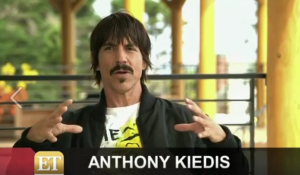 Anthony Kiedis has given an exclusive interview with ET Canada on his health and recent hospitalization:

Anthony Kiedis: Yeah, I’m good. Thank you. I think I had to get really sick to take a look at myself and get to the causes and conditions of my own health. And it turned out to be a good thing albeit being painful and a very sad to have to cancel the show. We don’t really do that. I’d rather play deathly ill than not play at all but in this particular instance, I was starting to go down as into the ground, so I got rushed to the hospital, got some help and now I get to figure things out.

ET Canada: That’s one of the things I’m interested from your perspective; this band is never one that cancels shows and I think that’s why people were so concerned but do you think it was blown out of all proportion? Coz I remember…

Anthony Kiedis: Umm…I think it was a slow news day.

Anthony Kiedis: Was what it was. Umm… yeah, you know when I opened my phone and saw I was on the news, I was like everything must be OK in the world today if that’s what’s making the news. Ummm… we don’t like to cancel shows. I had a teacher in high school who was called Carolee Brogue who was Peter Pan on Broadway when she was a kid, and she had uncontrollable diarrhoea but there was a matinee to play and a regular show to play, and she played them both with a diaper on, and she taught the acting class I was in that the show must go on. Don’t hang it up just coz you’re not feeling good, there’s a lot of people involved here, make it happen. So that’s been my philosophy for life until you just fall over and can’t actually stand up to play. So…

ET Canada: Are you comfortable telling us what happened or no?

Anthony Kiedis: Yeah. Basically I had inflammation in my guts. I had a stomach virus a few weeks ago and I’ve had operations on hernias from singing and…

ET Canada: Oh, really?
Anthony Kiedis: Yeah, coz I sing loud and dance and sometimes you rip your stomach open. So the scar tissue, the flu virus conspired to create an impassable inflammation so nothing I was eating was getting past the stomach and that becomes an incredibly painful situation where you get a fever and pass out. So I had to be pumped clean in the hospital and lo and behold, I’m on the mend. But it’s a process.

ET Canada: How do you feel now?