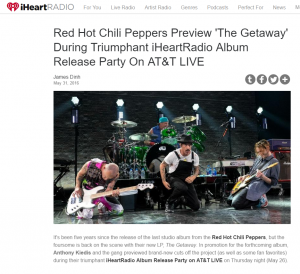 iHeart Radio have posted an update about ‘The Getaway’ launch party concert that was recorded in front of an audience on May 26th.

Venturing through their lengthy catalogue, the RHCP rocked the 10-song set with hits like “Snow,” “Otherside” and “By The Way” after kicking off the 90-minute event with their 2003 smash “Can’t Stop.” Still, this was promotion for The Getaway, so they made sure to preview plenty of cuts from the new album, which is due June 17 via. Warner Bros. Records, including lead single “Dark Necessities,” “Sick Love,” the energetic “This Ticonderoga” and second single “Go Robot.”

“I feel like all of the weirdness that we went through as a band and as individuals led to what our record is,” lead singer Anthony revealed during a Q&A portion of the show. “Whether it was Flea shattering his elbow or not being able to find a producer or writing songs that didn’t end up getting used or all these weird emotional and physical occurrences, it all worked out for us. In the end, I’m glad that all that difficult stuff happened because we like what we got.

The article also gives details about tuning into the launch party when it’s broadcast on the album release date, June 17th:

iHeartRadio Album Release Party on AT&T LIVE on June 17 at 9 p.m. ET on iHeartRadio.com/watchATT. Also, if you’re a DIRECTV subscriber, you can also watch the show on the AUDIENCE Network, DIRECTV Ch 239 or U-Verse Ch 1114.

Many thanks to Angra!