Real life has been crazy again so playing catch up yet another time! I’m clearing the magazines off my desk first…

The new edition of Classic Rock is running a Q & A session with Anthony Kiedis and Flea: 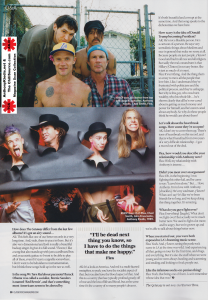 A recent review in NME of The Getaway: 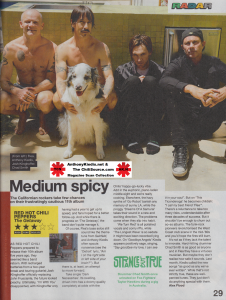 Transcript on The Chili Source if anyone is interested!

And there’s a brief mention of RHCP at Rock Werchter with a small photo of AK in Kerrang! (1628) 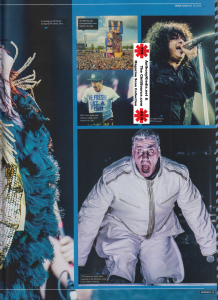 I’ve lost track of what I have/haven’t posted so here are the rest of the 2016 magazine scans we have online:

2016 June OOR From The Netherlands. lengthy interview about ‘The Getaway’ (Sorry no translation)

2016 June NME 5 reasons to love  and 5 reasons to hate RHCP… hard to distinguish one side from the other! Read if you need stress relief and want incitement to rip the heads off small fluffy things; otherwise best avoided if you are a CP fan! Another article in the sparkling history of RHCP in NME; they hate the band so much I don’t know why they bother to include them!

2016 June The Sun A lengthy and interesting article; a lot of the info is the same as in the video interviews of this time but it’s good to read it all written down.