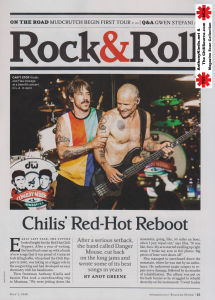 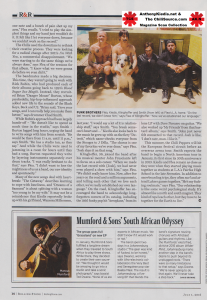 Chilis’ Red-Hot Reboot
After a serious setback, the band called Danger Mouse, cut back on the long jams and wrote some of its best songs in years BY ANDY GREENE

EARLY LAST YEAR, THE FUTURE looked bright for the Red Hot Chili Peppers. After a year of writing, the band had come up with a batch of new songs that it was proud of. Guitarist Josh Klinghoffer, who joined the Chili Peppers in 2010, was taking on a bigger role in the songwriting and had developed an easy chemistry with his bandmates.
Then frontman Anthony Kiedis and bassist Flea took a snowboarding trip to Montana. We were jetting down the mountain, going, like, 50 miles an hour, when I just wiped out,” says Flea. “It was like, bam. My arm started swelling up right away. I broke my arm in five places. Big pieces of bone were shorn off.”
Flea managed to snowboard down the mountain, where he was met by an ambulance. He underwent major surgery to re-pair nerve damage, followed by six months of rehabilitation. The album was put on the back burner as he struggled to rebuild dexterity on his instrument. “I went to play one note and a bunch of pain shot up my arm,” Flea recalls. “I tried to play the sim-plest things and my hand just wouldn’t do it. It felt like I let everyone down, because we couldn’t work on the record.”
The Chilis used the downtime to rethink their creative process. They were looking for a radical change after 2011’s I’m With You, a commercial disappointment. “We were starting to do the same things we’ve always done,” says Flea of the sessions for that album. “I knew what we were gonna do before we even did it.”
The bandmates made a big decision: This time, they weren’t going to work with Rick Rubin, who had produced each of their albums going back to 1991’s Blood Sugar Sex Magik. Instead, they recruited Brian “Danger Mouse” Burton, whose psychedelic, hip-hop-influenced approach added new life to the sounds of the Black Keys, Beck and U2. “Brian said, ‘I love your songs, and I can really help you make them better,'” says drummer Chad Smith.
While Rubin’s approach had been largely hands-off – “He doesn’t like to spend as much time in the studio,” says Smith -Burton logged long hours, urging the band to write songs with him from scratch. “He would be there from 11 a.m. until D p.m.,” says Smith. “He has a studio tan, as they say.” And while the Chilis were used to jamming in a room for hours until they had a song, Burton requested they write by layering instruments separately over drum tracks. “I was really hesitant to do that,” says Flea. “I didn’t want to lose the mightiness of us as a band, our raw identity and spontaneity.”
Many of the new songs deal with heart-break: “The Getaway” describes learning to cope with loneliness, and “Dreams of a Samurai” is about splitting with a woman “too young to be my wife.” It may not be a coincidence that Kiedis reportedly broke up with his girlfriend, Wanessa Milhomem, last year. “I would say a lot of it is relationship stuff,” says Smith. “You break someone’s heart and …” Kiedis also looks back to the music he grew up with on the fiery “De-troit,” which name-checks everyone from the Stooges to J Dilla. “The chorus is one of my favorites we’ve ever done,” says Flea. “Josh slays it on that song.”
Klinghoffer, 36, joined the band after his musical mentor John Frusciante left to focus on a solo career. “When we made the last record with [Josh], we had never even played a show with him,” says Flea. “We didn’t really know him. Now, after five years on the road and a million arguments, and telling each other that we love each other, we’ve really established our own language.” On the road, Klinghoffer has encouraged the band to acknowledge long-forgotten corners of its catalog, including the 1995 funky pop hit “Aeroplane,” from its lone LP with Dave Navarro on guitar. “We also worked up ‘My Friends’ from that bastard album,” says Smith. “John just never felt connected to that record. Josh is like, ‘I don’t care, man. I like it.'”
This summer, the Chili Peppers will hit the European festival circuit before an overseas arena tour. Smith expects the band to begin a North American tour in January, its first since its 30th anniversary in 2013. Kiedis and Flea remain as close as they were when they started playing music together as students at L.A.’s Fairfax High School in the late Seventies. In addition to snowboarding trips, they often surf and attend Lakers games together. “He’s my fucking soulmate,” says Flea. “Our relationship is like some weird psychological study. It’s almost like a north and south magnet. They kind of repel each other, but they have to be together for the Earth to live.”

The Cali-Funk Kings Refine Their Grind
Danger Mouse and Radioheads producer help on an adventurous Chili Peppers LP
Red Hot Chili Peppers The Getaway
Warner Bros ***1/2
Like being an NFL linebacker, being a Red Hot Chili Pepper is a challenging gig to age gracefully in: literally or metaphorically, tube socks on your johnson ain’t a good look at 50. To their credit, the Peppers’ 11th LP is a bold attempt to jibe their past party-dog selves with their present-day artistic ambitions – not always a perfect fit but a compelling one.
With production by Danger Mouse, and Radiohead sixth man Nigel Godrich on the mix, the sound is top-shelf modern-rock splendor: shimmering guitar fractals, flashing string arrangements, artisanal rhythmic flourishes. Yet Flea’s bass still grounds the music, as sinewy as lggy Pop’s musculature, with Anthony Kiedis dirty-romanticizing L.A. as he macks his way through. There are surprising moves (the Chic-cum-Daft Punk mash-up ‘Go Robot.’ the grinding blues rock and shoot-out to late producer J Dilla in “Detroit” and also familiar flourishes (the plodding rap rock of “We Turn Red’). Lyrically, the vibe is often wistful. On the ambient nostalgia trip “Encore,” Kiedis invokes the Beatles, while the sultry psych-funk jam ‘Dreams of a Samurai” finds him naked in the kitchen of a woman “too young to be my wife’ and subsequently-taking acid in the graveyard.” As visions of mortality go, sounds promising.