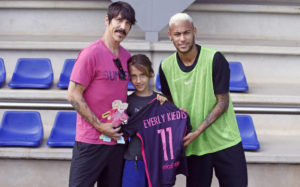 Anthony Kiedis attended the team-training on Friday of FC Barcelona along with his son, Everly Bear, and they met someone called Neymar, who is apparently a famous football player*. Everly Bear was given a purple shirt with his name on it and the number 11 which I’ve now been told is Neymar’s number.

(*I had no idea who he is and had never heard of him and tbh thought the video was with some random person until Shal and Angra explained… So blame them if I’ve got it wrong! I’m English, have never watched a football match in my life and once had to Google how many players there were in a football team for my son’s homework as neither of us had a clue… )