Snippets from a New Interview With Anthony Kiedis 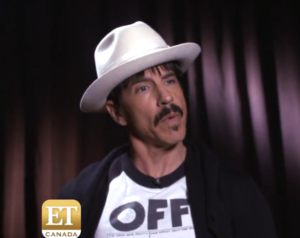 Anthony Kiedis was interviewed for ET Canada while in Toronto and a couple of snippets from the interview are out:

A section where AK talks about recent injuries and his son, Everly Bear, singing on stage with him and how he thinks Everly views him can be seen HERE

Anthony Kiedis : I wasn’t scared about the health scare. I broke my knee in the middle of this tour and had some surgery and fixed it up. At the moment, I have a torn tendon in my ankle. I’m always getting banged up and hurt and repairing and recovering and hurting and it’s just normal.

Interviewer: It’s no surprise that 54 year-old Anthony Kiedis is a little black and blue from rocking out night after night with the Red Hot Chili Peppers but it may surprise you to find out that he still gets nervous after performing for three decades in the business.

Anthony Kiedis: I’d be a little bit lost without the nerves. I want to be about borderline ready to throw up from nerves and then I’m ready to go.

Interviewer: As for those nerves, it turns out they’ve skipped a generation as Anthony’s nine-year-old son, Everly, has been surprising audiences during the band’s world tour.

Anthony Kiedis: I’m not trying, you know, to be the stage mum pushing him into this thing. He suggested that he was comfortable doing a verse of that song and I was kinda like, ‘OK, well let’s practice it,’ and he was like, ‘No, I’ve already practiced I’m good, I’m ready tonight’s good.’

He’s a little bit smarter than his dad; he’s not so impressed. He shushes me and to him I’m probably a bit of a dork and that’s just something I have to work on accepting.

Interviewer: But with over eighty million sold worldwide, six Grammy awards and eleven studio albums, you’d think Anthony’s son would be open to advice from his rock star dad.

Anthony Kiedis: The, last time I checked, kids did not take advice from their parents but the writing and the travelling and the making mistakes with your friends is the best part but once you get there, it’s kinda like, ‘OK, what do I do now?’, so I would tell him just to have fun and go and bail out if you have to but just go do it.

Anthony Kiedis: Well, I don’t want to consume it all constantly because there wouldn’t be any room in my head to do other things but there are a lot of silver linings. I’m looking for the positives. People are definitely waking up and resisting in a way, like, you know, I love the fact that people seem to care more now because, you know, there’s an extreme human being in the most coveted seat of our country and people are kinda going, ‘OK! Well, I guess I can’t just sit on my couch and let the status quo go by without being a part of it. So, that’s working.