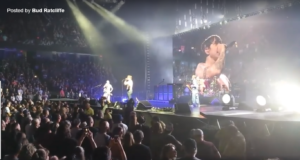 Anthony spoke about his father’s illness last night during the Grand Rapids concert and asked everyone to send Blackie their love. It was so moving, heartbreaking and beautiful.

“…If you could be so kind. My father is fixin’ to die and that’s OK. He’s had a wild, great journey and a helluva colourful badass life but he’s sick and he’s gonna to die now. He’s pretty lost; he’s just a spirit but I would like for everyone just to take ten seconds to send him some love, to send his spirit some love because pretty soon he will be sailingon and I would appreciate it if his home town could send him love for a whole ten seconds of love. Let’s give it up. Ten! [interval of silence] 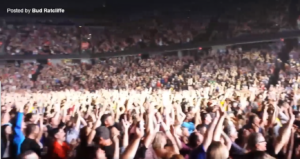 Thank you. Let’s do this tune. Appreciate it.”

The band then played Soul To Squeeze.

Many thanks to Bud Ratcliffe for sharing this beautiful moment. I don’t know if another version of this has been posted anywhere yet but the one I’ve seen has settings set so it can’t be shared directly. It is on Blackie’s new Facebook page JOHN KIEDIS  but I’m not sure how visible it is:
This entry was posted in Anthony Kiedis, Family. Bookmark the permalink.