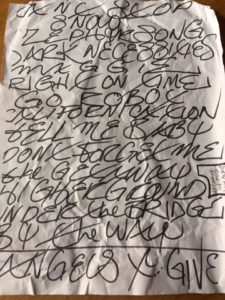 It was approaching a pretty last minute decision to go there- I think everything was booked about three weeks beforehand. I’d been thinking about it as it was the only tour date that worked out with school term times here as I had to take my kids but sensible me (there is a tiny fraction that’s sensible, honestly!) was saying it was too much money. And then, things took a very unexpected turn and suddenly we were going! Even if I thought no, there was no way my daughter wasn’t going to go and she MADE me (hehe) book flights and a hotel. So suddenly this very sensible mother was dragging her two children off to see RHCP in Iceland! (And my son now had the final proof he needed to prove his mother is totally insane!).

Monday 31st July: We spent the morning on a whale watching trip- we didn’t see any whales but we saw loads of dolphins which was wonderful. One pod was playing around the boat, swimming underneath it and diving around us for about fifteen minutes. We then had a rest at the hotel, an early dinner and headed off to the venue as I needed to collect our tickets. We got there about 5.20 as I wasn’t sure how long things would take and we ended up taking a taxi there rather than walking. I was surprised to see only about 10 people there as I’m used to us mad Europeans who queue from the early hours! It wasn’t until about 6p.m. that people really started to arrive. Doors opened at 6.30 p.m. & we got our tickets sorted just afterwards.

The venue was the smallest I’ve seen RHCP in. I think I read it held 11,000 people but that tickets were being limited to 10,000. I’d read comments saying it was open air but it turned out to be inside a sports centre. Everything was therefore on a much smaller scale e.g. the movable lights weren’t there as the ceiling wouldn’t have been high enough.

The Chilis were due on stage at 9 but it was slightly later than that when they came on. As usual for this tour, the show started with the trumpet strains of ‘God Bless The Child’ by Eric Dolphy and then the band hit the stage. From the moment they came on, it was totally electric. The atmosphere was amazing as people were really excited to see RHCP in Iceland for the first time and you could tell the band felt the same and was delighted to be there. There were repeated band member comments about how amazed they felt to be finally playing Iceland but it was so clear even without them having to say anything. The energy was bouncing back from the band to the audience and from the audience to the band. It was astounding! And the Red Hot Chili Peppers were well… red hot! They were on fire. It was show number 14 for me and it’s the best one I’ve been too. The band was just a unified ball of sheer energy and everything was in unison; their energy and enthusiasm was almost palpable.

A very long set! We had sixteen songs in total! A couple of times I thought this has to be the last song of the main set and then was totally surprised when there was another one. 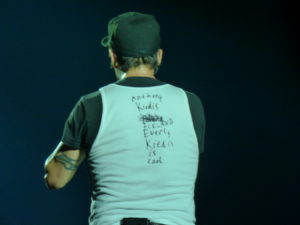 Anthony’s white sleeveless t-shirt which I’m presuming was done by his son, Everly Bear. The back read:

For the encore, Flea wore a red beanie and Anthony a black baseball cap which they hadn’t worn during the main section.

Anthony Kiedis on his mini-bike/scooter thing rolling off the stage (my son said he came on it for the encore too but I missed that bit).

Anthony, Flea and Josh just not being still. I thought AK would end up in Chad’s drum set the way he was running towards it and Josh was playing the guitar running around in circles at one point. Was unbelievable!

For those that want this sort of info Anthony took the white t-shirt off partly through the show and removed the black one he was wearing underneath during the encore (I think!). 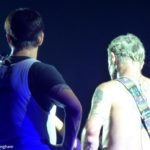 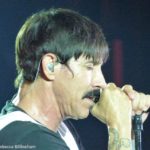 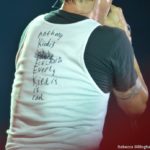 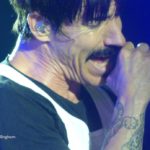 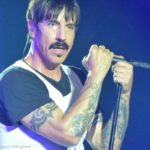 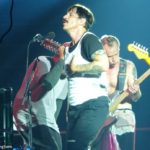 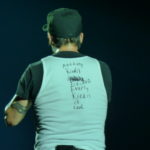 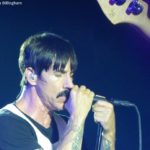 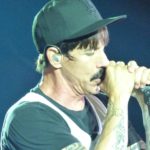 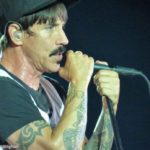 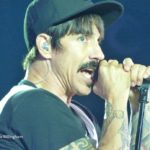