Happy Halloween! Anthony Kiedis performed with the rest of the Red Hot Chili Peppers at a LA school today. They all wore Halloween costumes- Anthony wore a school uniform style outfit with a half face mask on. Chad, Josh and Flea walked onto the stage from the side. Anthony followed them in a few seconds later but walked around the stage in front of the audience instead of entering the stage from the side as the others had. They played a short intro song and then ‘Can’t Stop’ before the band members wished everyone a Happy Halloween and left. 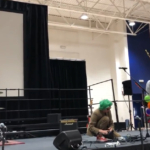 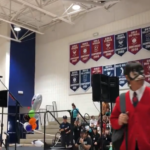 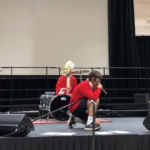 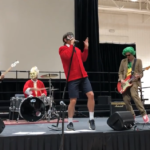 The videos are similar but only short so I’ve added several of them.

They were all there, I promise! pic.twitter.com/sziZtCNqUh

Thanks to the @chilipeppers for playing at today’s Great Pumpkin Day festivities!