The official RHCP Twitter account posted this morning with details of new tour dates in Australia and New Zealand! 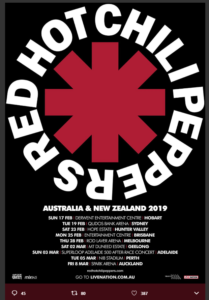 Dates for the Australia and New Zealand RHCP Tour!

There was some confusion this morning as to the validity of this as the link on the original Twitter post went to an error page on the official website, the website also said nothing and had no tours listed under the relevant section and no other RHCP social media accounts mentioned it. Then Chad Smith tweeted the news which was taken for verification only for the original tweet to be removed. But now a venue has posted (superloopadl500.com.au) so obviously there was just a massive mix up with info getting out and the original tweet was too early or something. Good luck to everyone getting tickets 🙂

Thanks to my sisterwife, Hamish and Sarah for helping out with info.