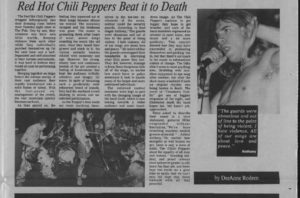 1984 October Zany review of a gig at Casa De La Etna- not sure whether due to RHCP, or the interviewer, or both!

1985 October A review of a concert In San Diego

1988 April A review of the band playing at The Pub.

1988 October 13th A very brief news item talking about the band’s earlier gig at the Pub and the fact they were about to appear at the Graduate in IV (Irving?)

Many thanks to Hamish at RHCP Sessions for the scans.