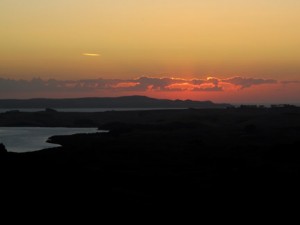 ANTHONY:  I bought a house in New Zealand on a whim, because when you’re there, you think, Oh I can get here whenever I want.  What’s 13 hours on a plane?  I haven’t been back since.  I bought a fuckin’ house there, and I never go there. Complex

More detail can be found in Anthony’s autobiography:

After the West Coast leg, we had a few weeks off before we set out to tour Australia and New Zealand again. We started off in New Zealand, and being back there made me realize that this is where I was going to make my home away from home. Somehow I hooked up with an ex-rugby player who was now an older, brutish, conniving real estate agent. One a break from our shows, he took me out to look at this 169-acre farmhouse overlooking Kai Para Bay, which is an hour and fifteen minutes northwest of Auckland. We went out on the most gorgeous, sunny day. I fell in love with the place, even though Kai Para Harbor is an incredibly rough body of water where great white sharks go to breed. It’s a furiously tidal, raging harbour.

My whole thrust of finding a home away from home was to buy a place near a clear, temperate, inviting body of water, one that I could swim in and play underwater. I have no idea why I chose this place, because none of that was there. But the view of the harbour was incredible, a kaleidoscopic, psychedelic patina of colors. And this agent had me all hyped up about the auction for the property, which was going to take place, coincidentally, while I was on tour in Australia. “This is your one and only chance to get this property. It’s gonna go quick, there are a lot of people interested. I’ll have you on the phone and I’ll do the bidding for you. Blah blah blah blah.”

I was on the phone from Australia, and he was at the auction. “It’s at a million dollars. Going up. Going up. Someone here wants it for one point seven. “I was like “Okay. Go two.” The next thing you know, I’d bought this place for way more than it was worth. When I got back, people started telling me that they weren’t even sure if there was anyone else bidding, that all these Kiwi businessmen were in bed with each other, but I didn’t know if that was true.

We finished the two-week cycle, and everyone went home to the U.S. except me. I went back to New Zealand, checked into a bed-and-breakfast, and went through the process of closing this deal. Which cost me about $1 million U.S. I was waiting for the farmer who had sold me the place to take his money and move to the Gold Coast of Australia, where it’s always sunny. Meanwhile, I was thinking, “Why on earth would these farmers leave the most beautiful piece of paradise for the crowded-ass Gold Coast, which is like Miami Beach, only tackier?” I soon found out. It turned out that I saw the farmhouse on one of the few days of the year when it didn’t rain. Three hundred days out of the year, that country just poured precipitation. It was cloudy, rainy, chilly, blustery, England-on-a-bad-day kind of weather.

Eventually, the farmer moved out, and I signed the papers and set up a bank account in Auckland. I got Greer’s father to be the caretaker, because people in New Zealand were known to move in and occupy vacant country properties. There was this Wild West mentality out there. Greer’s dad was going to check up on the property and make sure no one was squatting or stealing the fixtures.”  ‘Scar Tissue’ (pages 358-9)

The property has since been sold.

4 Responses to Past Homes: New Zealand