AK in ‘Acid For the Children’ by Flea 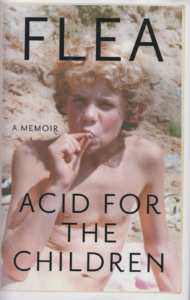 Flea released his ‘memoir,’ Acid for the Children, in November 2019. Clearly, it’s about Flea, but obliviously there are mentions of Anthony Kiedis within its pages too as the two were friends before the Red Hot Chili Peppers were formed- the band’s first concert is the effectively the ending point for the content of the book.

A lot of this book is hard reading if you are an Anthony Kiedis fan as he doesn’t come off well in Flea’s descriptions of their arguments and details such as drug taking and AK physically injecting Flea with drugs. Flea frequently professes his love for his ‘soul brother’ and band mate, but Anthony often gets a very hard ride within the pages too.

Flea [to me on reading the book], sees their relationship as very complex and it comes across as though he has no idea how he really feels about it, but is afraid to totally examine it in case it is a negative thing as that would jeopardise the whole band situation. Totally understandable, but there is certainly an undercurrent flowing. As a result, the narrative is very up and down concerning Flea’s feelings for Anthony and range between upset, despair, anger and love often within a few sentences.

Flea also mentions Anthony being an “alpha-male” and it’s clear throughout the memoir that Flea has an issue with that -his own self-image and insecurities in the face of it; not just with Anthony, but anyone else he perceives to be the same. The impression comes across clearly that Flea sees himself as a short, ugly little man who has consistently lost out to said alpha-males [and wants redress].

The Main Anthony Kiedis References in Acid For the Children

Flea describes the same fight that Anthony details in Scar Tissue as the starting point and goes on to explain how they sat next together in class and their friendship was forged. Then, it takes a turn… 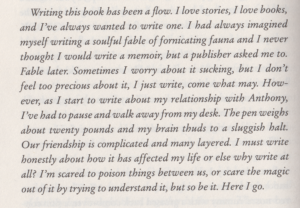 However, as I start to write about my relationship with Anthony, I’ve had to pause and walk away from my desk. The pen weighs about twenty pounds and my brain thuds to a sluggish halt. Our friendship is complicated and many layered. I must write honestly about how it has affected my life or else why write at all? I’m scared to poison things between us, or scare the magic out of it by hying to understand it, but so be it. Here I go.

Acid for the Children; page 162

Flea then starts recounting a story about Anthony talking to this girl while he’d never have the nerve to do the same. He mentions Anthony being an “alpha-male” [and his insecurities come across]. About turn, and a description of going skiing with Anthony and that Anthony was his kindred spirit especially as Flea could never freak him out:

The way I’d bonded with friends has always been intense, but with Anthony it was the next level sh*t… Nothing I did freaked him out, and I’d freaked out every other friend.”

Acid for the Children; page 165

Cue another change of direction! Flea liked getting high, but Anthony was more intense about it and took it to another level wanting to do it daily immediately after school. It creates the impression that Flea was forced to go along with this against his wishes and that Flea would have been happier to do other things. About turn! He loves Anthony:

Our friendship has been contentious, but the love between us and our true nature selves always rises to the top.

Pattern set! Up and down; love and hate. Story about throwing eggs at a kid they didn’t like while running naked through LA’s streets. On to Blackie and Anthony and an unpleasant evening with AK as a result of getting drunk and vomiting in The Rainbow on Sunset: 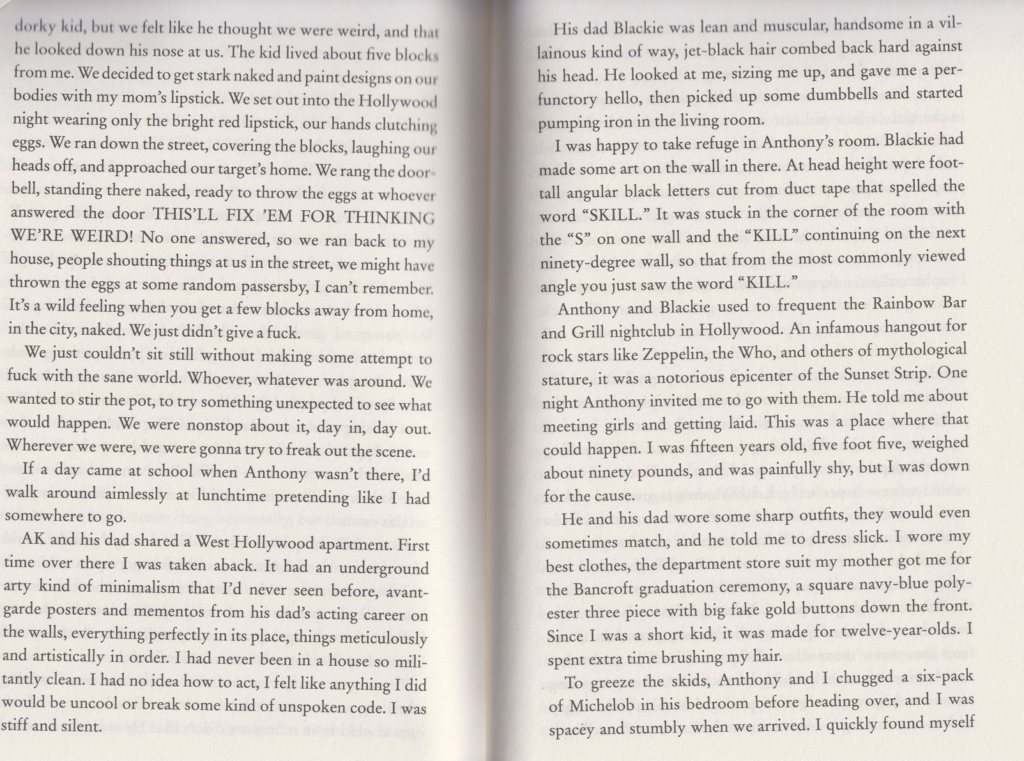 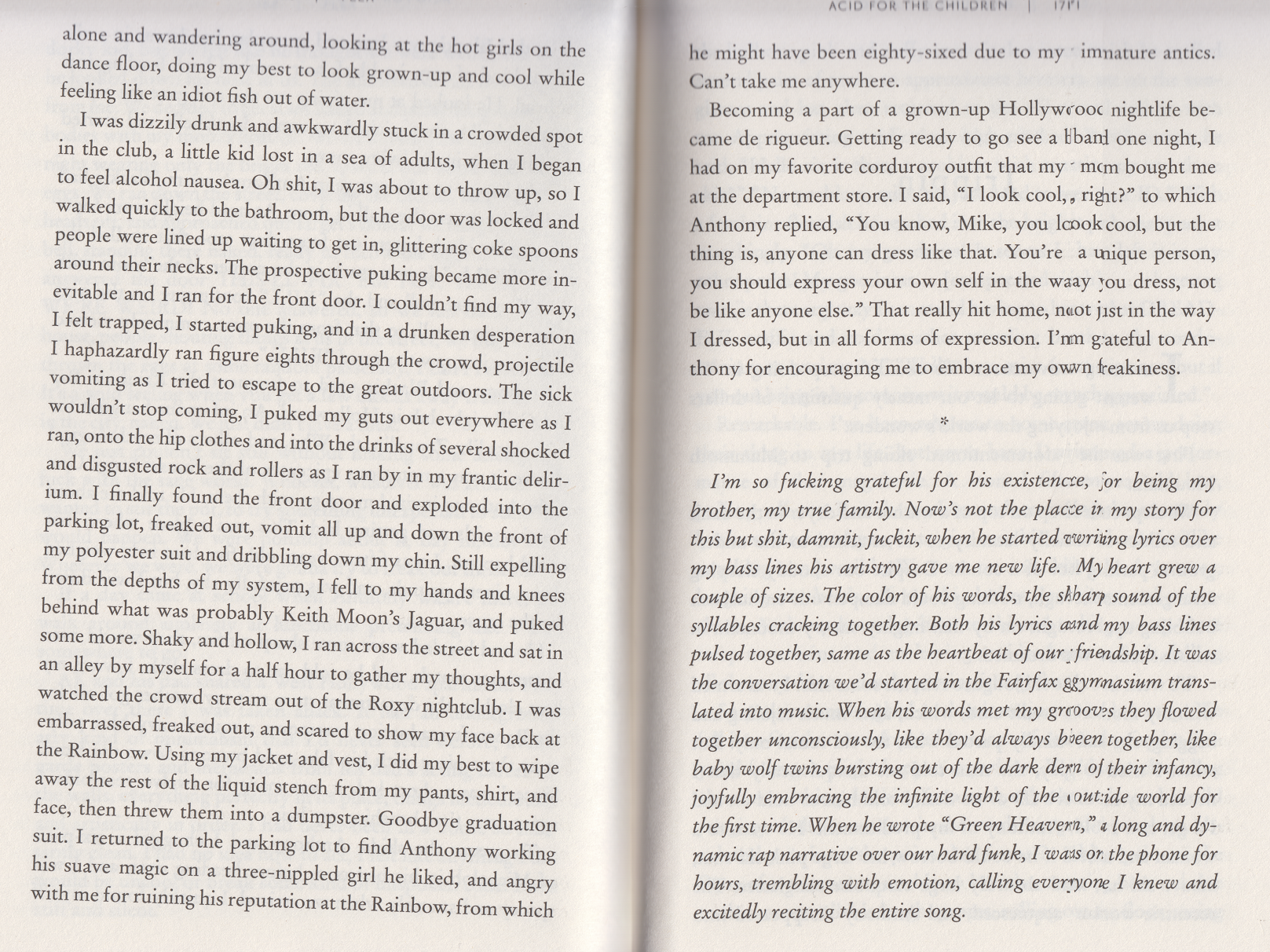 Recounts story of skiing in Mammoth Mountain [again, Anthony talks about this in Scar Tissue], and both ending up in trouble for tying to steal rental skies resulting in them bonding…

Then, the camping trip in Yosemite [Flea recounted this story in some of the book’s promotional interviews describing the event as being a defining low point in their relationship and typical of how vile Anthony can be]; 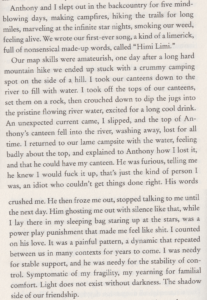 Anthony and I slept out in the backcountry for five mind-blowing days, making campfires, hiking the trails for long miles, marveling at the infinite star nights, smoking our weed, feeling alive. We wrote our first-ever song, a kind of a limerick, full of nonsensical made-up words, called “Himi Limi.”

Our map skills were amateurish, one day after a long hard mountain hike we ended up stuck with a crummy camping spot on the side of a hill. I took our canteens down to the river to fill with water. I took off the tops of our canteens, set them on a rock, then crouched down to dip the jugs into the pristine flowing river water, excited for a long cool drink. An unexpected current came, I slipped, and the top of Anthony’s canteen fell into the river, washing away, lost for all time. I returned to our lame campsite with the water, feeling badly about the top, and explained to Anthony how I lost it, and that he could have my canteen. He was furious, telling me he knew I would fuck it up, that’s just the kind of person I was, an idiot who couldn’t get things done right. His words crushed me. He then froze me out, stopped talking to me until the next day. Him ghosting me out with silence like that, while I lay there in my sleeping bag staring up at the stars, was a power play punishment that made me feel like shit. I counted on his love. It was a painful pattern, a dynamic that repeated between us in many contexts for years to come. I was needy for stable support, and he was needy for the stability of control.

Pages 182-184 Flea’s description of taking the Greyhound to Michigan to spend the summer with Anthony’s family. Describes how good Anthony’s mother, Peggy, was to him.

186 Anthony and Flea careering around Hollywood when given permission to drive Flea’s step-father’s car.

217 – 218 Similar details to Anthony’s Scar Tissue about pool diving and Anthony breaking his back. Flea describes leaving him with a friend and running off as he was scared he’d get into trouble.

224-5 Description of spending a summer in Michigan with Anthony and Hillel. Taking cocaine for the first time (scanned). 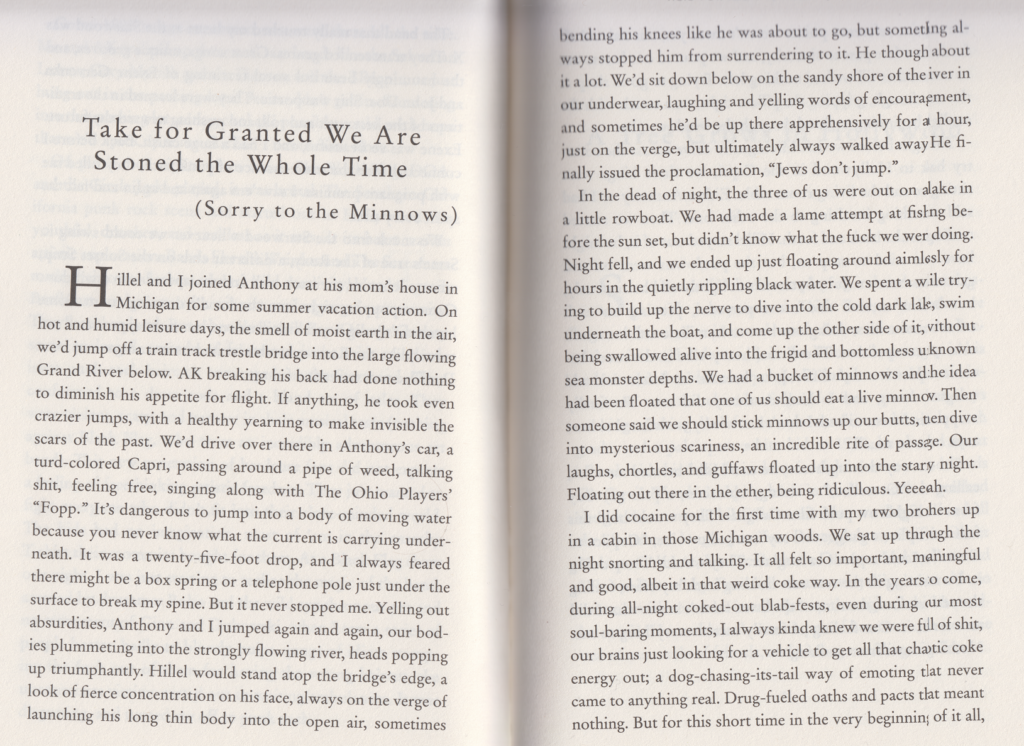 226 Flea and Anthony argument and insulting each other the day before they were to drive back to LA after the summer together. [Hillel stayed out of it].

255 Flea, Anthony and a friend getting a house together in Hollywood’s red light district.

258-9 Drug taking and throwing a party with Anthony.

264-278 Detailed description of taking drugs; including how Anthony injected him (by Flea’s choice; not forced)- have scanned just this part. (caveat about reading this as it is detailed): 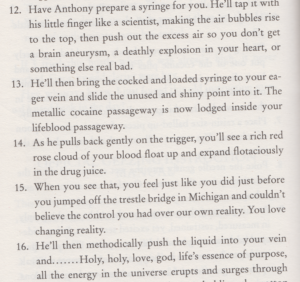 270-1 Account of Anthony getting high and threatening to throw a tyre off a roof. (scanned). 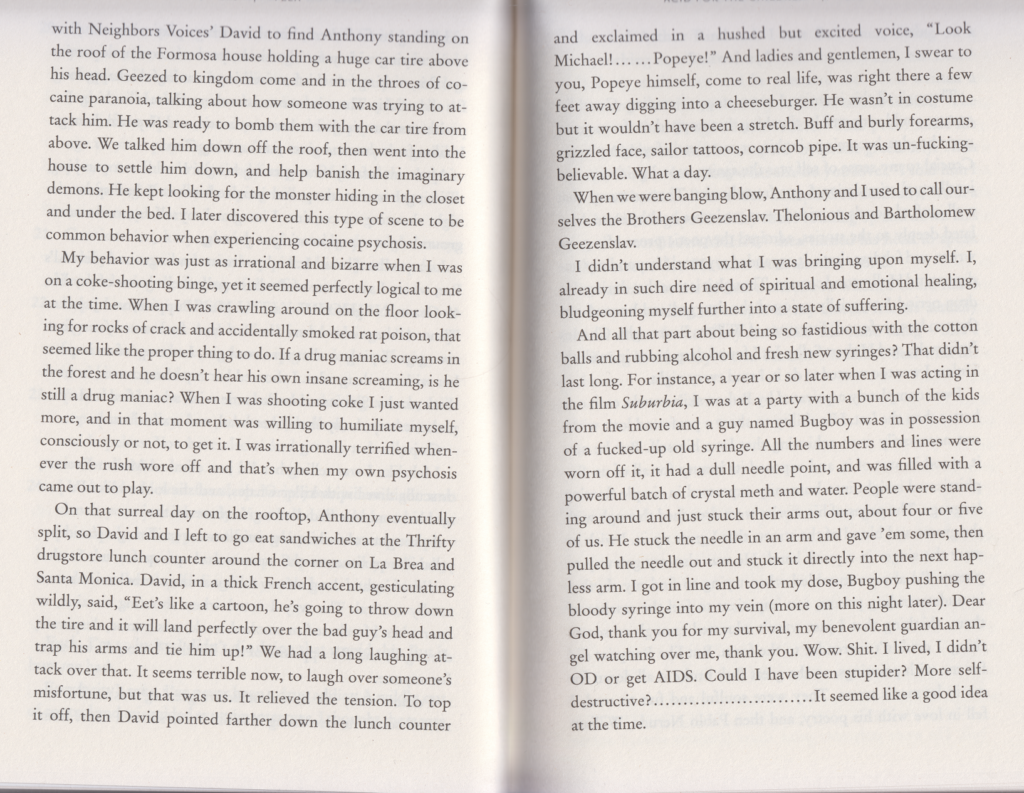 285 Description of how Flea and Anthony tag-teamed when shoplifting.

291-297 Trip and back to San Francisco. Amtrak without a ticket, got high and got kicked off for the lack of ticket. Hitch-hiked rest of the way to San Francisco and then sleeping rough before hitch-hiking home again along with a wrong direction ride on a freight train.

313 Flea and Anthony going for a meal they couldn’t afford in a restaurant. Describes how they ran away from staff afterwards. 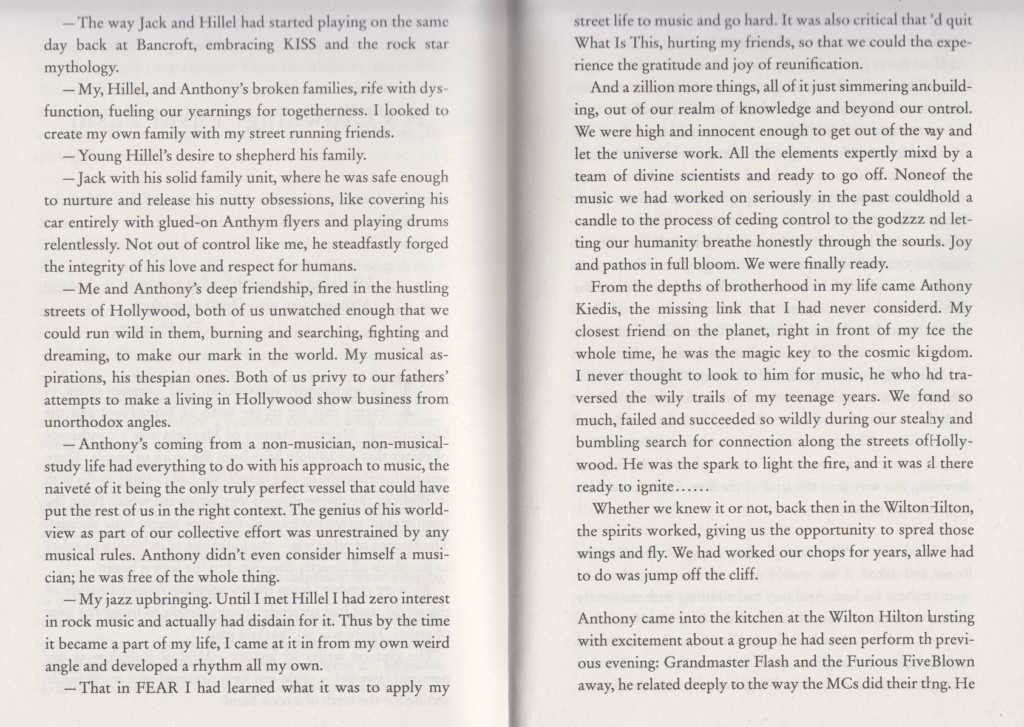 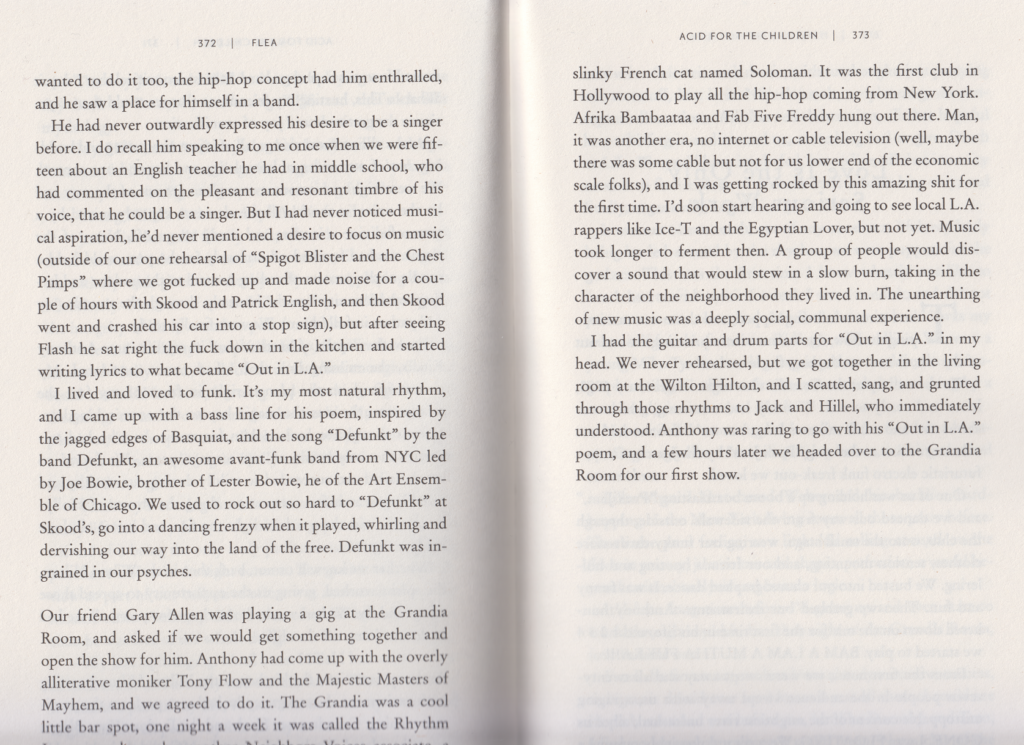 NOTE: As I read the book, I made a note of the main mentions of Anthony Kiedis within it. I haven’t re-read it so please let me know if I’ve missed anything out as I might have forgotten to jot a page down. I also waited a while because it seemed wrong to publish pages from a brand new book without allowing time for people to buy it for themselves first and likewise, it seems wrong to scan every mention of AK when the book is for sale and still relatively new.