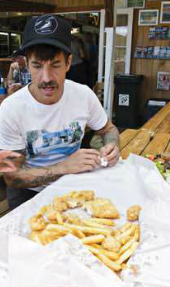 Anthony Kiedis is no longer vegan, or even, vegetarian. He eats meat and fish. Yes, he was voted the world’s sexiest male vegetarian by PETA, back in 2008, but that was then and no longer applies.

Unfortunately, the interview where he said explained why he started to eat meat again is no longer online, but in it he stated it was on a doctor’s advice. Instead, I’m using another video where Anthony  again mentions eating meat and fish. It’s from September 2016. The interviewer asks Anthony about eating the local Spanish food and this leads onto a discussion of what he eats.  It clearly demonstrates that he is no longer vegetarian. The section starts about 4.30 (transcript below).

Anthony Kiedis: I’ve been coming to Spain for so long that I kind of went through that stage of, you know, eating the local food, of course, I still eat the local food, but it’s not new to me because I’ve been eating paella since you were in your diapers.

Interviewer: But paella, we have more things than paella.

AK: Do you? I thought it was just paella.

Interviewer:No, no, no. We have many more.

AK: Yeah, you’ve got that crazy ham, from the pigs that eat only…

AK: That eat only acorns or chestnuts? Acorns.

AK: Yes, the wild pigs.  I have not eaten that but I would like to try.

Interviewer: We were just chatting about it before, I thought you were veggie. I read that sometime ago you told me that you’ve changed your…

The votes have been counted, and the results are in. It’s official—pop princess Leona Lewis and red hot chili pepper Anthony Kiedis are the sexiest vegetarian celebrities alive!

Kiedis recently went vegan after learning about the worldwide depletion of fish in the oceans and after a doctor recommended a healthy vegan diet for his son. “Soon after I [went vegan] I saw some documentary footage of what happens in the factory farming of cows …. It sealed the deal,” says Kiedis, who documented his earlier hard-partying ways in his autobiography, Scar Tissue.