Anthony had left his father’s home while still in high school at the age of 16; relations between the two had become increasingly strained and got worse when Blackie began to totally immerse himself in his characters; acting, dressing and even living like them at one. Eventually the two of them fought:

“Ultimately, there was no bloodshed, but the energy was violent and ugly. And something would never be the same between us for decades to come.”

The newly independent Anthony would squat in unoccupied buildings, sleep on whoever’s couch, or even in anyone’s back garden, for as long as they would have him; he even lived in his car at one point. Increasingly the rest of his life was going off the rails too as his drug habit increased; he would on occasion take from whomever he was living with, either using the money, or selling the goods, to raise funds for drugs. By this point his drug addiction was starting to spiral out of control and he didn’t manage to get it under control until he went into self-imposed rehab following the tragic death of fellow band member, Hillel Slovak, from a drug overdose in 1988.

Anthony managed to stay clean for several years but prescriptions drugs prescribed by accident set him on a downward spiral once more. There would be intermittent relapses and periods of being clean, but for most parts drugs were an issue and binges would often be set off by bad events in Anthony’s life (often triggered by break-ups with girlfriends) with further episodes again as a result of prescription drugs being wrongly prescribed. It was an issue that Kiedis was to battle until December 2000; on Christmas Eve of that year he attended a meeting and committed himself to sobriety. He still attends regular AA meetings (a friend sometimes discusses this on his radio show and also says frequently how Anthony has saved his life from addiction).

Anthony has dated many women over the years; some of them were famous (models) and some of them were not. They have included Sofia Coppola, Ione Skye, Heidi Klum and Jessica Stam to name a few. He dated childhood girlfriend Haya Handel for three years,and some of his adult relationships have lasted several years too, but most were a lot more fleeting. [See Piece of Aphrodite for more details.] Anthony has never married.

He was involved in a relationship with Helena Vestergaard for a couple of years, and the break down of that relationship at the end of 2014 seemed to affect him greatly. This was his last ‘main’ relationship to date, and the break-up formed the basis of many of his lyrics for 2017’s The Getaway album. The video for the single ‘Sick Love produced by another ex-girlfriend, Beth Jeans Houghton/Du Blonde, even featured a caricature of Helena throughout.

As for family, Anthony is still incredibly close to his mother (who was unfortunately widowed when her husband, Steve Idema, died of a heart-attack in 1996). He has two step-sisters whom he sees fairly regularly given the distance between them (Anthony pays for a family holiday for his mother, step-sisters and their families each year so they all spend time together then). He owns numerous other properties, some of which have been purchased for family members to live in e.g. Blackie.

Reconciliations were made with his father and he and Blackie enjoyed a close relationship for many years; Blackie even ran the RHCP fan club until his he retirement. The song ‘Savior’ on 1999’s Californication album was written for his father; as was the haunting, ‘The Hunter’ on The Getaway (2017), which chronicles Blackie’s descent into the ravages of dementia. 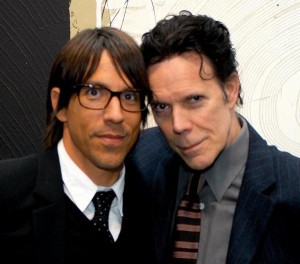 Now a multi-millionaire; Kiedis lives in Malibu where he regularly indulges his hobby of surfing. He also owns a sea front property on the island of Kauai in Hawaii and goes there several times a year.

As an ocean lover, Anthony is an advocate for the protection of the world’s oceans and frequently supports marine charity events either personally or within RHCP. He also takes part in other charity events on a regular basis  e.g. he has taken part in events for charities which promote surfing for children with autism, supported MAP which raises money to help musicians suffering from addiction and even painted surfboards to be sold.  Anthony also became one of the board of directors for the Silverlake Conservatory of Music; a charity set up by RHCP band mate Flea to help all children in the Los Angeles area have access to musical lessons no matter their financial background. RHCP always perform in some form at an annual benefit concert/fundraiser for Silverlake Conservatory and it is usually hosted by Anthony and Flea.

Anthony also collects art and has attended numerous art gallery events. The Silverlake annual benefit now often has an art auction and Anthony has been known to buy pieces from that too. Social media posts by friends have revealed he owns one of the famous nurse paintings by Richard Prince and two fractal art pieces by Kelsey Brooks.

Anthony Kiedis remains the front man of the Red Hot Chili Peppers. The band has now released eleven studio albums, as well as various compilations and live records/videos. They have received countless awards including Grammys and in 2012, RHCP were inducted into the Rock N Roll Hall of Fame. In 2015, Anthony was awarded the ‘George and Ira Gershwin Award for Lifetime Musical Achievement’ by the UCLA Student Alumni Association.

14 Responses to The Adult Years