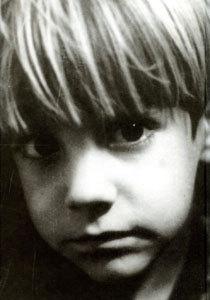 Anthony Kiedis emerged into this world on the first of November, 1962. There was no significance to his birth beyond the celebrations of his family and nothing to mark out the fact that this baby would one day become the lead vocalist of one of the most famous bands of all time. He returned home to live with his parents, Margaret (Peggy) Elizabeth (née Noble) and John (Jack) Kiedis, in the town of Grand Rapids, Michigan and it looked as if another child was born to a normal American family…

Apart from brief intervals, Anthony was not destined to have the traditional childhood of mum, dad and the white picket fence as his parents’ marriage was unsettled pretty much from the outset. Peggy and Jack married on July 2nd, 1960 following a whirlwind romance which saw them married within two months of meeting; within about the same time Jack was cheating on his new wife. The couple would repeatedly split and then have a period of reconciliation as their relationship crisscrossed the US following Jack’s move to LA in 1965 to study film at UCLA. It was during one of these reunions that Anthony was conceived. Sometimes the couple lived together with their young child in Michigan, sometimes in LA, and there was a brief spell in Florida in 1963 after Anthony’s grandfather moved the whole of the Kiedis clan there, but for the most part Anthony was cared for by his mother as a young child.

A very young Anthony Kiedis captured in a home movie by his father as part of his film studies at UCLA.

“The first film, A Boy’s Expedition, was a beautiful mediation on a two-and-a-half-year-old who rides his tricycle down the street does a big slow-motion wipe-out, and lands on a dollar bill. For the rest of the film, I go on a wild ride though downtown L.A. going to the movies, buying comic books, taking bus rides, and meeting people, thanks to that buck I found. In the end, it all turns out to be a fantasy sequence, and I pocket the bill and ride off on my tricycle.”

In December 1967, Kiedis and his mother returned to live permanently in Michigan after Peggy began dating Scott St. John who persuaded her to return from LA to her native state. Scott was Jack’s one time partner in crime although the young Anthony only knew that he was friends with someone in the family. Scott and Peggy married in 1968 and apart from joy on the actual wedding day because Anthony got a new bike, the marriage did not have a positive effect on him;

“The move [back to Grand Rapids] wasn’t that traumatic, but Scott coming into the picture was definitely disturbing. There was nothing calming or soothing or comforting about this chaotic character.”

However, this was to be another short-lived marriage for Peggy and Scott was no longer permanently on the scene by the time their daughter, Julie, was born on March 12th, 1970;

“Living with a single parent and seeing that all of my friends had mothers and fathers in the same house didn’t make me envious. My mom and I were actually having a blast, and when Julie came into the picture, I couldn’t have been happier to have a baby sister.”

in Grand Rapids, Kiedis soon made new friends and discovered the joys of nearby Plaster Creek and apart from the occasional disruptive visit by Scott (until his mother divorced him after he was sent to prison) and worries about his father’s lifestyle after visiting him one summer in LA, AK was enjoying his childhood. However, by third grade at Brookside School, Anthony started to change and began to developing a love/hate relationship with the world around him and a dichotomy was forming in his lifestyle; he was often in trouble at school, yet he acted as a champion to the deaf and mentally retarded children that Brookside incorporated into the mainstream education He was often the outsider because of his wild behaviour, but he loved to entertain and put on small ‘Partridge Family’ style shows for his friends (even if only to make a quick buck on occasion!). He was the loyal son to his mother, but was seen as the troublemaker elsewhere e.g. he stole sweets from a store and used gym rings to smash his school windows on another occasion.

Meanwhile, his father was having more and more influence on the young Anthony. Although he would only see his father for a couple of weeks in the summer when he joined him in LA or when Blackie (Dammett as Jack was by now known following a name change for his acting career), made his rare trips to Grand Rapids, Blackie was such an extrovert figure of a man that he couldn’t fail to make an impressionable impact on his son especially compared to the social confines of his native town.

“Everyone on my block, everyone I’d ever come into contact with there, wore short hair and short-sleeved button-down shirts. My dad would show up in six-inch silver platform snakeskin shoes with rainbows on them, bell-bottom jeans with crazy velvet patchwork all over them, giant belts covered in turquoise, skintight, almost midriff T-shirts with some great emblem on them, and tight little velvet rocker jackets from London. His slightly receding hair was down to his waist, and he had a bushy handlebar mustache and huge sideburns.”

Anthony loved to spend time with his father and looked forward to the gifts  and tales of exploits in foreign countries that Blackie would send to him from his various jaunts around Europe. Home in Michigan with mum was normal; Blackie introduced him to a whole wide world which was exotic and exuberant, and those heady summers in LA were doing nothing to detract from the lure of his father so it was only natural that Anthony started to express the desire to go and live permanently with his dad.

Anthony’s lobbying increased when Peggy met her future husband, Steve Idema because he realised that he no longer needed to be the ‘man’ of the family. Following a failed attempt to run away to the City of Angels, Peggy began to consider it more and eventually she gave her permission for the move.

Anthony relocated to Los Angeles in 1974, at the age of 12, and apart from a brief return to Michigan in 1976 (his usual summer visit was extended for one term for him to bond with his new sister who was born in October of that year), the City of Angels was to become his permanent home. Little did anyone at the time realise just how instrumental that move was to be for his future life.

14 Responses to The Early Years