“Anthony was a very notable character at Fairfax,” says Keith Barry. “He was always an extrovert; that was his strength.”

However, not all of the teenage Anthony’s life was spiralling out of control. Summers were still spent with the stabilising influence of his mother in Michigan, and their bond continued to develop and mature even though they effectively only saw each other for a few weeks of the year;

“… but my own mom has been a pillar of stability and consistency in the lives of everyone around her. She and I have always been tight. When I was growing up, my mother was the perfect picture of unconditional love and worked her ass off to support me for about 10 years…”

Blackie also played a major positive influence; he did all that he could to encourage his son’s education as he realised the importance of it from his own background. He also encouraged Anthony to read widely from their  home library and increased the youngster’s vocabulary by introducing a new word on a daily basis through a game they played.

Kiedis was also a diligent pupil at school for the most part, interested in getting straight ‘A’ grades wherever possible. He had a trusted radio alarm to wake him on time each day and Blackie would always leave enough money to cover the cab fare into school; the return trip would be via the “Black Knight skateboards, which had a wooden deck and clay wheels,”  that Blackie had brought for the purpose.

For years therefore, Anthony’s life was a dichotomy; a normal school boy by day but increasingly wild LA child by night and at weekends. He juggled to manage both aspects of that, but as he got older, unsurprisingly, Anthony started to regard the lessons learnt in school as increasingly irrelevant when compared to those he was learning in real life;

“I don’t think that [school] is the ultimate decisive factor in whether or not someone becomes educated or able to speak or write. This comes from experience and self-education more than anything I ever learned at school.”

However, he still continued to attend school, going on to excel at English under the tutelage that his teacher, Jill Vernon, gave him. It was this period that saw him developing his skill and love as a writer- skills that were once again to feature heavily in the future. 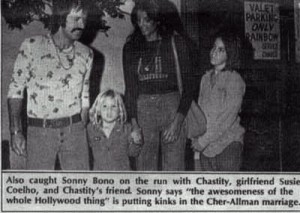 His English teacher wasn’t the only influence in Anthony’s life at this point for he also found himself coming under the benefaction of the famous singer, Sonny Bono, who for several years was to be a stabilising influence on the young Kiedis, introducing him to an alternate lifestyle to that which Anthony was experiencing on a daily basis. Kiedis came into contact with Sonny through Connie, one of Blackie’s girlfriends, and the group formed a close bond; so much so that Kiedis used Bono’s home address to get into Emerson, the elementary school of his choice but which was out of catchment area for his own address.

Kiedis had a room at Sonny’s house, was taken on trips and given skiing equipment to be able to accompany Bono and his daughter, Chastity, on skiing trips. (Anthony and Sonny grew apart over the years and especially as Anthony grew more rebellious).

Not only were adults having an effect on his development, but new school friends were increasingly starting to have a major impact too. Yes, some of them were having a negative effect in the terms of drugs and petty crime committed while in each other’s company, but there were also positives for Anthony too which came in the form of new friends who introduced him to a new world of musical experience. 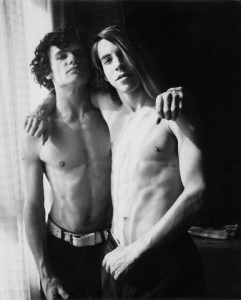 Anthony ended up attending Fairfax High after being rejected from Uni High for not being in the right catchment area; they knew he had been using a false address to attend Emerson and rejected him on the first day. It was a major blow at the time, but turned out to be another serendipitous quirk of fate that was to have a monumental affect on Anthony’s future for there he was to meet the people who would shape and form his immediate future.  He made a number of close friends at school but Michael Balzary, soon to become Mike B and hence Flea, and Hillel Slovak were crucial for Anthony’s future. Not only did they have the strong bond of friendship but Flea and Hillel were in bands…

2 Responses to The High School Years