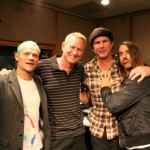 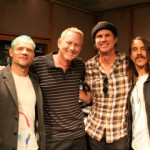 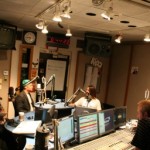 Thank you to KQOQ for posting the account and photographs of the event.

There was a point in our lives when we had reached that personal point of despair; as cliché as it was, we just wanted to run away, get away from the people around us. During one gorgeous purple and pink-stained Los Angeles sunrise, at the pinnacle of our crisis, we were driving home after a long night of heavy partying somewhere in downtown Los Angeles. Hungover, dirty, and despondent, we listlessly turned on KROQ for our drive-of-shame soundtrack. Red Hot Chili Peppers‘ “Under The Bridge” began to play, the lyrics “at least I have her love/the city she loves me/lonely as I am/together we cry” bringing us to a tear-fueled epiphany.

At that moment, we realized how much the Red Hot Chili Peppers-version of Los Angeles meant to us. And then, how important hearing their music on KROQ has been for Angelenos collectively. Red Hot Chili Peppers were an integral part of our upbringing, our love for the city, our intimate musical education, and even our local saviors in times of need.  As they joined Kevin and Bean today to talk about their new photo book highlighting their journey through the Los Angeles rock scene, we realized that their journey has also become ours.

“ I think we got lucky. I think the gods were smiling on us repeatedly with finding new people to play with that had magical chemistry and dedication to music and energy and making something cool.” We are lucky enough to see the members of Red Hot Chili Peppers pretty much everywhere we go in the city, so we weren’t surprised by Flea’s bright blue hair-do or Anthony Keidis’ sweet ‘stache. Chad was understated and rocking a beanie and plaid shirt. As an entity, the Red Hot Chili Peppers have a lot of chemistry, an almost-spiritual synchronicity that we think is readily apparent in their music. So, it came as surprise that the band once fostered discord–or doubted the potential of their music. Keidis laughingly recalled their beginnings: “We predicted that we would last until March of that time. We would do this for about a month or so and see how it goes.”

At several points, Kiedis was even kicked out of the group, although it was not something that caused ire, because the Red Hot Chili Peppers always came back to a perfectly balanced center. Kiedis elaborates: “Yeah, at least one point, maybe a couple of kick outs. One for sure..which–by the way–I welcomed at that point in time…I think we got lucky. I think the gods were smiling on us repeatedly  with finding new people to play with that had magical chemistry and dedication to music and energy and making something cool…what are the odds? Finding it at one time is already a bizarre miracle in life…it happens–I think–if your little receptors are open to the right people.”

“ We thought we were the shiznit at that moment so we didn’t mind waving our flag.” Anthony Kiedis

According to Last.fm and their listeners, Red Hot Chili Peppers stick master Chad Smith recently came out to say that 2011 will see the release of a new album by the funk rock veterans, meaning it will be a full five years since the release of 2006′s Grammy Award-winning Stadium Arcadium, but seems like a blink in time considering the band has been around for almost 3 decades. Since 1983 the Los Angeles quartet have been fusing funk, rock, hip hop and psychedelia to attract a vastly diverse audience. This can be seen by the sheer volume of their listeners – 2,752,624 different listeners in total, culminating with a total scrobble count of 149,464,865

Having a little bit of dissent amongst young, impetuous artists is normal and encourages growth, despite the temporal pain it brings. The Red Hot Chili Peppers had the humble musical beginnings that required close quarters with band mates and constant hustling. Anthony Kiedis recounted those ever-familiar sounding moments for the sympathetic ear of many musically aspirant listeners: ““We were enthusiastic when we began. We all lived—if not in the same room—the same house. When it came to having a show, it was, “Ok, you make the flyer, I’ll get on the phone and tell people we are playing, you go down to the bar and sit at the bar and tell all the girls to come…we thought we were the shiznit at that moment so we didn’t mind waving our flag.”

Over the years the members of Red Hot Chili Peppers have changed from the overly enthusiastic boys from Fairfax High School to the rock legends they are today. This growth has brought both pain and joy for the members, which Kiedis took the opportunity to wax philosophically about: “Well, thank goodness for both, first of all. If it was just a joyride the whole time, I don’t think we would have stuck with it, IT giving us the opportunity to experience pain, and love pain, and know what it is to get to the other side…then it means something, then we all grow up together. And have new experiences. Whatever the ratio is, thank goodness for both.”

The merits of this growth is evident in Last.fm listener preferences. Most listeners like the older albums better. Their latest release Stadium Arcadium narrowly tips Californication as the band’s most listened to album with 23,210,505 scrobbles compared to 22,613,195, whilst 2002′s By The Way hits 18,92,4015 scrobbles. 1991′s Blood Sugar Sex Magik, their first major label release and the album that propelled them into the mainstream spotlight, flies the flag for the band’s older material with 10,56,6290 scrobbles making it their fourth most listened to album. We are huge fans of their earlier stuff,  but their three pre-1990 releases take the accolade of being the three least listened to albums with the self-titled debut proving to be their least popular amongst listeners.

Part of this history and painful/joyful metamorphosis is highlighted in the Red Hot Chili Peppers and Brendan Mullens new photo book, The Red Hot Chili Peppers: An Oral/Visual History. Flea said he had “short vision” about the purpose of the book, but eventually realized the profundity of documenting that moment in Red Hot Chili Peppers and Los Angeles history: “I don’t remember how it got started, but we got together with a friend of ours—Brendan Mullen—who is a great man, a kind of fixture in the beginning of punk rock in Los Angeles in the late 70s…he’s someone who gave us some of our very first gigs. He used to book this place, Club Lingerie, up on Sunset and we first played there in ’83…For me and Anthony mostly, we started off playing in a band in Los Angeles, the punk rock scene with the bands we admire: The Weirdos, The Screamers, The Germs, Black Flag. These bands, they had mythological status for us…for me, it was the most romantic, exciting, dynamic, tragic, beautiful, poetic, animal, feral, artistic, poetic, beautiful, intense thing, you know? And Brendan was a real crucial part of that.”

Anthony Kiedis was also hesitant about the book because he wasn’t in the right mindset at the helm of the project, but he down the line he recalled his own personal fondness for other bands’ photo books: “We were in the middle of a very, very long tour. So my judgment and perception and perspective and outlook on life were just very weird…I was weary; I probably hadn’t slept; I had a broken foot and was just in Baltimore. But I did have memories of looking at photo books of bands that I loved over the years and being moved by them; to see the process, to see the kind of years unfold. I remember seeing a gigantic Rolling Stone book once and I got to see them when they were kids and when they first started and the kind of look in their eyes and kind of see where they were at as an upstart band…And I also think of Hollywood in the early 80s as a very, very magical place. We started traveling young, saw a lot of the world and Hollywood as special at that time and I knew that we had a bunch of pictures from the early days and I thought it would be cool to kind of tap people in to the scene that we came from.”

Red Hot Chili Pepper has been around for almost thirty years and their musical endurance” is that this joyful” and “painful” road has challenged but not broken them. Flea described the process of what it’s like to be on stage and the evolution of the process of entertainment: “I feel like we just got better as we went on. I mean, you play a show and you tap into this feral part of yourself. And let it all go, because, you know, it’s just the nature of the music. In the beginning, for me, I would get exhausted and wanna collapse, and go back to my hotel room and feel like ‘I can’t make it,’ ‘I’m gonna die.’ ‘I can’t keep doing this night after night. I have 8 more months of tour in front of me.’ But as time goes by, you realize that you do survive it. You start thinking, ‘Ok, this is survivable. And not only is it survivable, but you learn ways to boost your energy and keep your body strong and keep your mind focused on the task…the key to being powerful, emotionally, physically, is getting yourself out of the way, and letting God speak.”

Or letting their songs speak for themselves. Our own little story about their impact is not unique. Perhaps, the Red Hot Chili Peppers have inadvertently acted as inspired rock-funk gurus to many Angelenos.

For many of us, the Red Hot Chili Peppers has been that band that “had mythological status for us” becoming “the most romantic, exciting, dynamic, tragic, beautiful, poetic, animal, feral, artistic, poetic, beautiful, intense thing, you know?