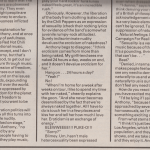 Thank you to Kathie Davis for the transcript.

Welcome to an all-nude interview!  The rock world has been shaken to its underpants by THE RED HOT CHILI PEPPERS’ sacrilegious, soxy, nude re-enactment of the fab four’s road-crossing feat.  Why did they do it?  ANTHONY KIEDIS raps with DAVID QUANTICK and MYRNA MINKOFF.

Here we are, fully clad, about to wake up Anthony Kiedis in Los Angeles.  Anthony is the singer in The Red Hot Chili Peppers, and thus is known to thousands as The Man With The Falling Cock Sock on the cover of the ‘Abbey Road’ EP.  Why is your sock falling off, Anthony?

Harldy, yik.  The whole business of this record seems to be wishful thinking on – if not by – the Chili Peppers’ parts.  All the tracks are taken from previous albums, none were recorded at Abbey Road, and the ensuing shambles seems merely an excuse to walk naked over a zebra crossing.

“It is,” burbles Anthony happily, “We just wanted to take the photo to use as a funny promo.  We thought it was a funny joke and we’d go get naked and cross Abbey Road and make everybody laugh.  And EMI invented a concoction of putting together an EP of our songs from our previously-unreleased-in-England LPs.”

Anthony continues: “It’s fine by me, because I think it’s a very glamorous concept to be able to take a picture that The Beatles did in the ‘60s but with no clothes on. It’s a very exciting concept to me.”

How, one wonders, atremble, was this tribute to the past executed?

“It was kinda like this.  We parked our car in a driveway by the crossing and it was freezing cold, it was mid January, and being the bold fearless youngsters that we are, we stripped right down in the parking lot and we all sprinted to the crossing and assumed our positions, gathering a few onlookers, of course.  We got a couple aged 80 who seemed totally unimpressed by the whole event, and when I asked them why, they said, ‘Ah, we bin seeing’ butts for years…’ “

Quite right too.  The casual reader will not be surprised to learn that The Red Hot Chili Peppers are obsessed with their own nudity.  They even perform naked, a sight people are expected to pay money to endure.  Why is this egregiousness inflicted on the public?

“I’ll give you an explanation for that.” promises Anthony, and at once wallows into a gully of awfulness.  “To begin with, The Red Hot Chili Peppers make emotional music.  That’s the whole concept, and I don’t mean it to sound corny, but that’s what makes it so good, to get out our pain and our pleasure through music.  And that’s an expression of freedom; it more or less cleanses our souls.

“We like to expound on the issues of freedom,” he adds, expounding wildly.  “Freedom all over the world.  Freedom for people oppressed by governments, freedom for the planet to be clean, and just freedom to believe and be what you want to be…”

Followers of liberation politics will be eager to see how all this turns into a celebration of male nudity.

“When we get naked on stage,” says an overheated Anthony,” no longer are we bound by any preconceptions of people having to wear clothes when they play music, and it feels so f—ing good, I can’t even tell ya.  To be stripped down and play your hard rockin’ funk tunes naked feels great, it’s an incredible rush.”

Obviously.  However, the liberation of the body from clothing is also used by the Chili Peppers as an expression of sexuality (check their rocking lyrics for evidence of the band’s somewhat juvenile rumpy-rock attitudes).  Surely indiscriminate nudity devalues the eroticism of nakedness?

Anthony begs to disagree:  “I think eroticism comes from more than being naked.  My girlfriend sees me naked 24 hours a day, weeks on end, and it doesn’t devalue eroticism for her.”

“When I’m home for a week after weeks on tour, I like to spend my time with her naked,” cheerily explains the goon.  “And she never becomes desensitized by the fact that we’re always naked together.  All I have to do is touch her in a few places and kiss her and tell her how much I love her.  Eroticism is an exchange of energy.”

Blimey, Um, hasn’t male heterosexuality been expressed quite long enough?  You push your sexuality rather loudly and crudely, even when dressed.

“I dunno,” says mean Anthony, “I think denying your sexuality is more of a British philosophy.  I think acknowledgement of your sexuality is a very basic element of life, and it can’t be ignored.  To ignore it is a suppression of natural feelings…”

Natural feelings.  Is this the Campaign for Real Sex?

“Sexuality is a very big part of our music because of the funk rhythm.  It’s a pounding, thriving, driving beat that can’t be…”

How do you react if you find that you have excited men?

“I’d be lying if I said don’t,” chirps Anthony, “because I’ve been approached by several magazines for homosexuals, so I’m sure they find something exciting about me.”

From what stems this love?

“I think it’s just because we live in Los Angeles, which has a large gay population and they come to see our shows, and we take off our clothes, and they enjoy it.   And even if they’re aware of our sexual preferences, they don’t become disinterested in the four healthy young men on stage.”

How could they?  Have you ever done an all-nude interview?

Then we shall conclude our business hastily.  If The Red Hot Chili Peppers were dogs, what breed would they be?

Anthony responds eagerly.”I would make our drummer a St. Bernard so he could rescue people.  The guitar player, he would be one of those hairs little Tibetan dogs, a laso apso.  And the bass player is a whippet ‘cos he’s so skinny.  Whippets are good.”

“An atomic dog!  No, just joking! Er… I would be a loveable mutt and I’d probably wanna live with my mom ‘cos my mom takes good care of mutts”.

Yes, readers, deep down the rampaging God of Lust Anthony Kiedis is a big softie mongrel.  Well, you never expected him to be anything useful, did you?