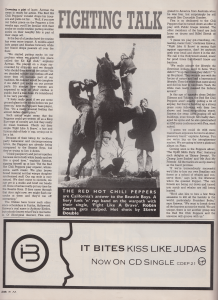 Downing a pint of lager, Antwan the swan is ready for action. The Red Hot Chili Peppers’ vocalist drops his trousers and pulls out his… Well, if our saw our Index piece on the Peppers a few weeks ago, you’ll be familiar with their socks-on-cocks routine; putting woollen socks on their naughty bits is part of their stage act.

In the bar of a London hotel the routine has even more impact. A middle-aged lady gasps and blushes furiously while her friend drops peanuts all over the floor.

“We started putting socks on our peckers when we played this place called the Kit Kat club,” explains Antwan. We played on a stage surrounded by strippers and we thought “why should they have all the action”? So we decided to take our clothes off and since then it’s become part of our tradition. No concert would be complete if we didn’t put socks on our private parts. It’s strange how women are expected to take off their clothes in public, but if a man does, it’s considered to be very peculiar.

“It feels really good if we put some ground glass in the socks before we put them on,” says the Peppers’ bass player, Flea. “It’s a really unusual feeling that almost defies description.”

Such antics might mean that the Peppers could get written off as a King Kurt type of novelty act, but they really do mean business. Check out their single ‘Fight Like A Brave’, a fast and furious slab of funk ‘n’ rap, crying out to become a hit.

Because of their liking for reckless party behaviour and uncompromising lyrics, the Peppers are already being compared to the Beastie Boys, but they’re trying to live it down.

“I think people try and put us together because we’re both white bands and we like a good time,” explains Antwan, zipping himself up at last. “But the Red Hot Chili Peppers play organic, wholesome, earth music. We play brown bread material not that wimpy doughey synthesized stuff. Our rap style is very natural; We don’t mime to records, we just get in a studio and howl our heads off. None of us has really got any time for the Beastie Boys. If they came through that door right now, we might flash our cocks at them and they’d run off screaming.”

The Chilies have known each other since schooldays in Fairfax, Hollywood. Antwan’s real name is Anthony Kiedes [sic] but nobody knows what Flea’s real name is. Of Aboriginal descent, Flea emigrated to America from Australia when he was four, but surprisingly he still sounds like Crocodile Dundee.

Flea is so dedicated to the Chili Peppers that he turned down an offer to play with Public Image Limited. The other members of the band are Jack Irons on drums and Hillel Slovak on guitar.

“I guess we play gut-crunching, rib-tearing manic funk,” continues Antwan. “Fight Like A Brave” is saying fight against oppression, don’t let anyone grab your head and shove it in the dirt. We call it the Hollywood sound, music for good times that doesn’t know any barriers.

In this age of squeaky clean Debbie Gibsons and Tiffanys, the Red Hot Chili Peppers aren’t’ exactly getting a lot of airplay, but they’re building up a strong grass roots following with their live shows and headline grabbing stunts. Antwan the swan likes leaping off tall buildings, even though he’s badly damaged his spine and he also gatecrashed an EMI sales conference with Flea, stark naked.

“I guess we could do with more mainstream exposure but we’re an interplanetary band,” explains Antwan. You see we’re big on the interplanetary market. We are going to have a platinum album on Pluto.

Coming soon is the Peppers album, ‘The Uplift Mofo Party Plan’, featuring such delights as ‘Skinny Sweaty’, ‘No Chump Love Sucker’ and ‘Me and My friends’.  All the tracks are as rip-tearing as the band promise.

“If we’re tremendously successful we’d like to buy our own Brazilian rain forest or school of whales and conserve them,” says Jack, the drummer who’s the quietest pepper. “The rain forests are being cut down and turned into scrub and whales are still being hunted.

“We’d also like to hire a few Ninja assassins to kill all the fascists in the word, particularly President Botha,” says Antwan. “We want to break down all the barriers across the world. We are unique, there is not another group like the Red Hot Chili Peppers and the universe will groove with us.”