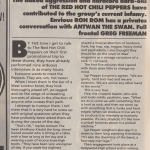 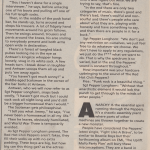 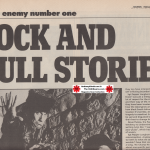 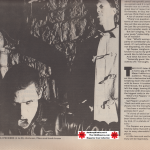 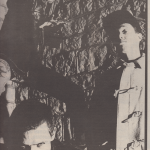 The naked aggression and hardcore hard-ons of THE RED HOT CHILI PEPPERS have contributed to the group’s current infamy. Envious RON ROM has a privates conversation with ANTWAN THE SWAN. Full frontal GREG FREEMAN

By the time I get to talk to The Red Hot Chili Peppers on their first promotional trip to these shores, they have already performed nine arduous interviews in as many hours.

Everyone wants to meet the peppers. They are, um, hot news!

When I meet them in the bar of a West London hotel, they look thoroughly pissed off, jet-lagged and on the verge of unleashing torrents of abuse in the direction of anyone who crosses their path.

I attempt to humour them. I tell them that it is very hard to come up with original questions when they have probably been asked them all during the course of the day.

“That’s OK,” replies Antwan the Swan (Anthony Kiedis) the long, blond-haired vocalist who is sitting at a table with a face as long as the day and is wearing a pair of vicious knee-high boots. “They have been very unoriginal all day. If you made the slightest attempt at originality, I’m sure you’d manage it.”

My mind goes into overtime. Oh yes, the Peppers have a nasty habit of performing live encores naked, except for socks that cover their plonkers. We’re not talking about ankle socks either, but full length football socks. What is more, these boys supposedly fill them up with their inter-ballistic missiles.

So have they got big ‘uns or are they fakes? This question must be posed for the future of rocn ‘n’ roll.

You must have some mighty huge willies.

“Well, it’s no problem,” says Antwan. “Would you like me to show you?”

“This I haven’t done for a single interviewer.” He says, before unlacing one of his boots and pulling off one of his full length socks.

Then, in the middle of the posh hotel bar, he stands up turns around and drops his trousers.  A lot of fidgety hand movements around his groin area follows. The he swings around, trousers and pants around the knees, his arse smiling to everyone present and both arms open wide in declaration.

There’s a forest of black tangled pubes looking me in the eye as Antwan’s kingsize whopper hangs loosely, snug in its white sock. A few heads turn. I break down in laughter and Antwan scoops them all up and puts ‘em away again.

“You haven’t got much sonny!” a middle-aged Scotsman in the corner of the bar barks at Antwan.

Antwan, who we will now refer to as Sgt Pepper Longhorn, snaps back coolly, “I haven’t got much but I could still suck cock all night and you’d still be a bigger homosexual than I would.”

The Scotsman gets philosophical.

“I tell you what Jimmy,” he says, “I’ve never been a homosexual in all my life.”

Then he leaves, obviously humiliated, and World War Three is temporarily avoided.

As Sgt Pepper Longhorn proved, The Red Hot Chili peppers aren’t fakes, they fill their socks up with no extra padding. These boys are big, but how big can this thing get? As the actress said to the Texan.

My FIRST impression of The Red Hot Chili Peppers was that they were goofy American eccentrics who played a musical abortion of hardcore, funk, hip hop, rap, reggae, heavy metal and psychedelia. I also thought they should be on the cover of Mad magazine as a vintage caricature of a rock ‘n’ roll band.

The first five minutes that I spend with them does little to change my mind.

Sgt Pepper Longhorn agrees. “We are goofy, hard and mad and we are eccentric. We are unlike any other band in the world.”

This is very true. Flea, the cropped bassist, who acts and looks mildly psychotic, says, “What we do is come up with something that is hard as rock, and then we come up with something that is funky and hard edged. When we produce it live we try to produce it as intensely as humanly possible. It’s very physical. It’s like how a pinball bounces about in a pinball machine.”

Sgt Pepper Longhorn also says it is down to their long standing friendship. “It’s also the chemistry of the band, a four-way marriage.”

Their engagement took place at Hollywood high school and in various hardcode East Coast bands. EMI snapped them up and Andy Gill, from The Gang Of Four, produced their self-named and hard to find debut LP.

It was their second album, ‘Freakey Styley’, however which gained them wider recognition. It was an apocalyptic fusion of dance and hardcore and it was freaked out to inter-planetary proportions with the help of the Godfather of funky madness, George Clinton.

It left the Peppers as true pioneers but with an identity crisis.

Do you think people don’t know how to comprehend the peppers?

Flea: “Yeah, but we are not interested in that, just enjoy the music that we play. If you want to dig deep into it and figure out what we are trying to say, that’s fine.

“In the end there are only two categories of music, there’s good and there’s bad, there’s soulful and non-soulful and there’s people who care about what they are , playing with honesty and have something to say and then there are people in it for a buck.”

Sgt Pepper Longhorn: “We don’t put any restriction on ourselves, we just feel free to do whatever we choose. We don’t have to apply regulations, we just do the f*** what we want to do. That is why the spectrum is so varied, but in the end the Peppers’ sound is consistent throughout.”

How important was your hardcore upbringing to the sounds of The Red Hot Chili Peppers?

Sgt Pepper Longhorn: “Without that anarchistic element it would lack the punch to get through to the minds of other people.”

Anarchy is the essential spirit running though the Peppers. It’s a chaotic assembly plant where parts of other machines are thrown together to create a new monster.

People have considered the Peppers’ latest single, ‘Fight Like A Brave’, to be similar to the Beastie Boys but their forthcoming album on EMI, ‘The Uplift Mofo Party Plan’ will bury these misconceptions. They are a band in every sense of the word and that is what ‘Party Plan’ tries to get across.

Like Faith No More, who supported them during their highly successful American tour, the Peppers are christened in the spirit of punk and they too have interpreted it to mean no self-inflicting boundaries.

Sgt Pepper Longhorn: “Fight Like A Brave’ was just a metaphor. We have a lot of respect for the American Indian and their way of life. It’s terrible how they have been treated, it’s terrible how the Aborigines are treated and how black South Africans are being treated. It’s terrible, disgusting and a tragedy to mankind. Every man should be sad and disgusted by that and do their best to change that reality.”

Nevertheless, the Peppers do have a tendency to undermine their stance by writing lyrics like “I want to party on your pussy”, which has brought charges of sexism.

Sgt Pepper Longhorn: “It is a misconception. Anybody who took time to listen to what we say in our lyrics wouldn’t have that confusion. We have a song, ‘No Chump Love Sucker’, that’s about one specific person and her traits as a person and it is not about the female race as whole. We have a great deal of respect and admiration for females. In fact, we worship pussy and we think that is very flattering.”

A lot of women wouldn’t think so.

“There’s no question of equality in terms of men and women in our mind. We just like sex and we like women and we just like proclaiming that, which we do not consider sexist, but sexual.”

But isn’t singing, “I want to party on your pussy” potentially offensive to a lot of women?

Flea: “What’s wrong with wanting to party on somebody’s pussy? It’s not sexist, it’s not putting women down, it’s not degrading, it’s stating our love.”

Sgt Pepper Longhorn: “I have been known to say to my girlfriend that I would like to lick her pussy.”

And what has been her reaction?

“Generally good. She takes her clothes off,” he laughs.

Two days later the Peppers play a manic gig at The Harlesden Mean Fiddler to a packed audience. They go through their set like a destructive bull, hell-bent on breaking down the walls of boredom with its horns. Hillel Slovak, the guitarist, got ill and left the stage, leaving the Peppers to improvise with choruses of “We’ve got the biggest cocks in the world.”

What’s the Peppers’ message to the world then?

Sgt Pepper Longhorn takes it up. “Rock out with your cock out!” he shouts into the microphone.

You have a morbid fascination with penises don’t you?

“It’s kind of weird isn’t it,” says Flea. “We just love our penises, there has been times when I’ve had nothing but my dick. It’s a statute of stability in our lives.”

The Peppers are pioneers of a new freakey styley that will send gamma rays to every danceable limb on the planet.

A little less cock and bull and they truly will be legendary.