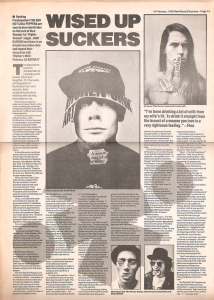 Rocking Freakopotami THE RED HOT CHILI PEPPERS are soon to burn into Britain on the back of their Wonderful ‘Higher Ground’ single. JACK BARRON met them in an Amsterdam tattoo hole and tapped their obsession with `Mother’s Milk’.

The basement room in Amsterdam is pulsating with sweat, hash and laughter. On the walls, photographs of illustrated men and women, their multicoloured skins writhing with stories, look down on us.

What predominates this afternoon in Hanky Panky’s is the noise. As tattoo guns of needles constantly puncture ink into skin it sounds like 1,000 hamsters being barbecued alive.

In the left corner sits the owner of the emporium, Hank Schiffmacher, his brow furrowed in concentration. A grizzled bear of a man, the Da Vinci of the tattooing world, Hank screes the gun across the back of Antwan. The Red Hot Chili Pepper’s singer remains as impassive as a cliff-face. He’s been here before, knows the pain factor involved. Hank has been working on the massive cubic native-American Indian image on the vocalist’s back over a period of several years.

In the right corner, sporting a pointy beard and pink mohican which makes him look him the bastard offspring of an Egyptian pharoah, lurks bassist-cum-film star, Flea. The first ever tattoo he had done was-tellingly- the head of Jimi Hendrix. Today he grins as a snake is etched forever on to his arm. Behind the jollity lies a tragic reality though.

Since the band’s last visit to Hanky Panky, guitarist Hillel Slovak has died of a heroin overdose and drummer Jack Irons has defected. Their respective replacements-John Frusciante and Chad Smith-pace the emporium debating over what tattoos to get.

Chad, a mountain of muscle from Detroit who trained with percussionists from Funkadelic, settles on an elaborate scorpion with an ancient Japanese face. John, a 19-year-old from LA on his first visit outside the States, can’t make up his mind. “Awwww, man, I’ve looked forward to coming to Hanky’s for years, now I feel like I’m letting the side down.”

For a minute it seems like John is about to erupt with tears of frustration.

“Do we get frustrated? Sure, sometimes,” mulls Antwan, who claims to have an Indian penis. But the music pulls us through. And the only thing that can be said about our music is it’s a complete, honest and direct expression of the experiences of our lives.”

WERE SQUATTING in Voorburowal in the crotch of Amsterdam’s red-light district. Earlier in the day, The Chili Peppers had played a short set in Dam Square as part of an arts festival. They were squeezed in between singing nuns and opera singers. The Red Hot Chili Peppers are big news in Holland and the Dutch – unlike the British – have taken to the Hollywood band’s latest slice of music like babies to a nipple, which is apt because their last album was called ‘Mother’s Milk’.

As with their three previous LPs, the band – under the aegis of producer and Material bod, Michael Beinhom- continued their idiosyncratic trek of imploding the spikes of thrash-punk, snub-nosed funk, and tripped out psychedelia. People are now tipping them to make as big a mark on the sonic map of America as Guns N’ Roses.

“I think if we face a problem it’s that we confuse people,” continues Antwan. “People are so used to a band just playing one genre of music that when they hear a band like The Red Hot Chili Peppers which expresses so many different facets of their personality, without really caring what people think, then some minds don’t know how to accept it.

“I don’t consider it a schism so much as multi-dimensional. The Red Hot Chili Peppers, being born and raised in America, were inspired by a number of types of music. We aren’t constricted or bound by the notion that we have to be a certain way with our songs.”

Antwan seems quite subdued today, not the kind of chap who once waltzed across the pedestrian crossing in London’s Abbey Road wearing nowt but a cocksock and a smile for a publicity shot.

The Iast time I saw him – in LA-he acted like he was on fire and there was no water in sight. The band at that time were dusted. The drug-related death of Hillel and the emotional fall-out it caused – as charted on the album track ‘Knock Me Down’ – has obviously had a profound impact on The Chili Peppers.

“When Hillel died, the attitude change in the band was enormous,” explains Antwan. “I felt like a bit of my soul had been chiselled away. He was such a big part of my life, a close friend and an amazing guitar player, that it was really like someone cutting half of your heart out and telling you to carryon. It was very enlightening as well.

“Sad as it is, I learned so much from him dying. The whole life that, we lead is a series of losses and gains. By losing Hillel I gained a greater respect for my own life and also for the relationship and love that I share with my friends.

“You see, that was a big problem with Hillel: he’d become so isolated and lost through drug use that he had lost touch with what was really important to him-the love of his friends. He never wanted to admit he had a problem that he couldn’t conquer himself.

“The nature of drug-addiction is comparable to the nature of cancer, it’s a disease and you can’t treat yourself. You need help, though not necessarily medical help. To close yourself off can be deadly. It was for him. And that made a huge change to my life. I don’t take drugs any more, including alcohol. I haven’t done for over a year. That isn’t to say I regret the experiences I’ve had with drugs because they can be very mind-opening.

“As a youth growing up, taking a hit of acid for the first time can be instrumental in the way you’re going to lead the rest of your life. But I reached the point where it no longer worked for me. So I made the change in my whole lifestyle, which was difficult after 12 years of getting high on something everyday.

“I think that the change has lent itself to a more extreme focus on what the whole band is about and my music. We feel the need to stick together, stay strong, and finish what we began all those years ago with this band.”

AND WHAT did they begin? A clue is given a few hours later in a bar. The Chili Peppers play a short impromptu set on borrowed instruments. The circumstances may not be perfect but the result remains the same as they whip through Hendrix’s ‘Stone Free’. Here is a band simultaneously as abrasive as the most intense metal crew you’ve ever seen. But also as rhythmed-out as the most bass-happy group you could hear.

The Chili Peppers are athletes of the groove, no wonder they get on so well with George Clinton. In particular, new guitarist John —”A fresh funky injection of blood in the as” with three hats perched on his head-zooms with talent.

Rocking Freakapotamus is as good as description as any for the Chili Peppers. They were going to call the album that at first. Their blend of humour, virtuosity, and sheer vitality is both heavy shit and absurd. They really could only have originated in Hollywood, stars right down to their jockstraps.

It’s the old punk ethic but without the leather jacket and glue, or before that the jazz ethic but sans the elitism and intellectual banality: putting individuality before the mass. The Chili Peppers are dazzling but prefer to support each other as a unit, which is what their all-time icon, basketball-player Magic Johnson of the LA Lakers, apparently does.

“I’d just like to say f— The Pet Shop Boys,” berates Flea before pausing to let loose a long stream of piss into the canal. If The Chili Peppers have an overactive gland of adrenalin it’s Flea. On the tram later, he turns into a human beatbox, splicing Funkadelic tunes into his lippy overdrive much to the delight of the Dutch. But even he’s more calm and reflective than before.

Part of this is due to having a child, and part of it is taking on the responsibility of becoming a serious actor. You can see him as a devilish provocateur on the shoulder of Michael J Fox in Back To The Future Part 2 and the yet-to-be-made Part 3.

“Why f— The Pet Shop Boys?” asks Flea. “Well, they suck too much to do anything else. I hate them, they’re Indicative of what’s happening in the pop music industry. In the Top 40 chart there is so little music that has any significance or has any emotional impact. Music is a direct expression from the heart, or should be, and The Pet Shop Boys are just doing pap bullshit for the sake of money. And I think that’s really sad.”

Why did you call the last album ‘Mother’s Milk’, Flea?

“First of all I had a baby last year and I’ve been drinking a lot of breast milk from my wife’s tit. It’s great, the most sweet, warm and beautiful thing. To drink it straight from the breast of a woman that you love is a very righteous feeling. But the main concept of it is mother’s milk is very good for you. It keeps you strong and makes you healthy and the harder you suck the more you get.

“And that’s what our music is all about. We think that with the new record we’ve given people music to keep them strong and healthy. Basically it’s f—ing good for you. Liking mother’s milk isn’t pervy, it’s the giving of all life. You start your life on it, if you’re lucky.

“As for our own lives, as a band I think we’ve changed – two new members for a start. But what I think has happened is we now put far more emphasis on the future. I’ve always been a very irresponsible person, not worrying what people think.

“I don’t care about my money or my clothes or my body, but now I have a child and since Hillel died I place more emphasis on the importance of living every moment in the best possible way. I want to see my daughter, Chloe, grow up and rock out like a f—ing freakopotamus. That’s how things have changed and I think it’s cool.”

The Red Hot Chili Peppers are the last of the Hollywood soul connection. In years to come they will be venerated. Right now if you want to ignore them then, as they say, “F— your ass, bud.”