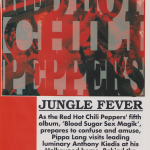 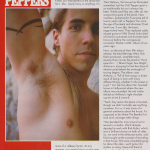 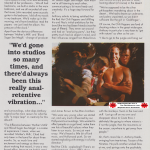 As the Red Hot Chili Peppers’ fifth album, ‘Blood Sugar Sex Magik’, prepares to confuse and amuse, Pippa Lang visits leading luminary Anthony Kiedis at his Hollywood home. Behind the facial stretch marks, she discovers a mind in tune with modern art, pool and the jungle…

“Would you mind taking your shoes off please…” asks the extraordinarily neanderthal specimen whose home I’ve just invaded. The beautifully-polished wooden floor is, I admit, a perfect victim for my three-inch stilettos, and I shame-faced oblige.

Kiedis isn’t neanderthal in the sense that he’s – like – overly hairy or anything. It’s more of a rubbery factor. At any moment, you expect him to spring onto the pool table (set fashionably in the centre of an immaculate white room hung with works of fine art) and start pulling impossible ape-like faces at you. On the other hand, would he want to ruin a perfectly good pool table? The house, set deep in the Hollywood hills is hardly what you’d expect this modern-day Tarzan to live in. But then, the Red Hot Chili Peppers are known for being dangerously unpredictable – that’s how they’ve managed to survive so handsomely for eight years in the music business. OK, so apart from core members Anthony and bassist Michael ‘Flea’ Balzary, the line-up has fluctuated somewhat, but the Chili Pepper spirit is as traditionally hot as it always has been. Kiedis and Flea are, after all, the songwriting spice of the band. New members, guitarist John Frusciante (all of twenty years old, a Peppers’ fan since the age of fourteen) and drummer Chad Smith are, if you like, the basic, ungarnished meat. They replaced sadly-missed guitarist Hillel Slovak (who died of a heroin overdose) and drummer Jack Irons just before the outrageously successful ‘Mother’s Milk’ album of two years ago.

Now, on the eve of their fifth album release, the bewilderingly titled, Rick Rubin-produced, seventeen-track, seventy-three minute (lip-smackin’ thirst-quenchin’…) ‘Blood Sugar Sex Magik’, Anthony is enjoying his last few days of relative quiet before the onslaught of touring begins. The album, says Anthony, is “full of love songs, a direct result of being in love with many different things, whether it’s the ocean or a girl.” As I ask him about the ‘haunted’ house in Hollywood where the new album was recorded, the red indian etched on Anthony’s right shoulder squints at me (I swear!):

“Yeah, they reckon the place is haunted, though we didn’t actually see anything ourselves. For us, it was more of a general ambience about the house. It’s supposed to be where The Beatles first took acid, amongst other things.

“We decided this time around not to record in a studio. We’d already decided to work with Rick Rubin, which was a brilliant choice on both of sides. So, we were in the rehearsal studio, and Rick brought up the concept of recording in that house. We were completely gung-ho about the idea – we’d gone into studios so many times and there’d always been this kinda anal-retentive vibration, very sterile, high- tech. And there’s a bunch of other bands working in there, there’ve just been bands in there, and you know there’ll be a thousand more bands in there after you’ve gone.

“So we thought how great it’d be if we actually moved into a house, lived and recorded there, how much warmer it would be, and how much more we could isolate ourselves.

“The house was perfect. It was built in the 1920’s in Laurel Canyon and has this great atmosphere. We hired this cosmic-psycho chef, who was extremely talented at her profession… We all had bedrooms, we built a studio in the main ballroom, and we all recorded all over the house. John recorded some acoustic guitar in his bedroom, I did all my vocals in my bedroom. We’d wake up in the morning, we’d have breakfast, read the papers – we just lived the album. No pressure of the clock.”

Apart from the obvious differences between ‘Mother’s Milk’ and ‘Blood Sugar Sex Magik’ – change of producer and surroundings, what does Anthony regard as the main reason for what he calls “a major leap” in creativity for this album?:

“The whole point of this record was to let the creative power of the unit flow through, and by being relaxed with each other, we’ve succeeded in doing that. That pressure of unfamiliarity prevalent in the last album has gone. You can hear on ‘Blood Sugar Sex Magik’ how much we’re all listening to each other, communicating a lot more freely and creatively. It’s a huge step forward for us.”

Anthony admits to being satisfied that the Red Hot Chili Peppers are fulfilling his and Flea’s initial ambitions for the band (the two had been friends since the age of fifteen). They never sat around and had an “analysing party”, but they pretty much had an object in mind, and their influences ranged from Miles Davis and James Brown to the Marx brothers:

“We were very young when we started out, and very much influenced by our Hollywood surroundings. We wanted to affect people on a gut level, make them see lots of beautiful colours when they listen to our music. So we just went crazy. We’d heard a little bit of funk music, and Hollywood punk. So we started exploding with energy in a funky direction.”

Red Hot Chills – exploding?! There’s an understatement. Since 1983, these mutated sons of California have been hitting society with their weird kaleidoscopic viewpoints on life -certainly livened up the music business. Musically, they’ve stuck a great big wet digit up the proverbial backside, and visually too they’re shocking, in the sense that they just will not let you walk away from them. Watch a Chili Peppers video, and it’ll be the cheapest trip of your life. Anthony shows me some photos taken on the recent video-shoot for the first single off ‘Blood Sugar Sex Magik’ – ‘Give It Away’. The band are seen almost entirely painted in silver, looning about (of course) in the desert:

“We’re supposed to be the silver philosophers wandering about in the desert… We had to leave our underarms and palms unpainted, so we didn’t suffocate like the girl in ‘Goldfinger;’-

Of course, the Chili Peppers are fond of shooting videos in the great wide-open. Anthony in particular is very keen to “get with nature” as often as he can:

“I like to go to the jungle and hang out and surroundings, with the monkeys. Swim in the river and stuff. I just go off on my own and disappear down to Costa Rica. I definitely like going to where nature is -if not the jungle, then the mountains or the ocean, anywhere to get away from people.”

Ah, that’s more like it – Anthony Kiedis, swinging from tree-to-tree, Tarzan of the Nineties. He pulls another wicked face at me, and springs onto the pool-table. “Isn’t this how most people play pool?” Er…I hastily slip my shoes back on and leave, the apelike noises gradually getting fainter and fainter.