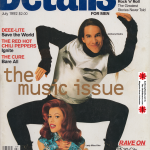 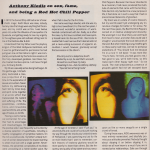 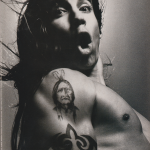 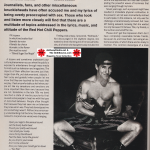 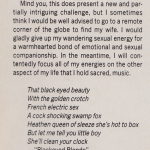 Thanks to Kathie Davis for the transcript.

Anthony Kiedis on sex, fame, and being a Red Hot Chili Pepper

In 1974, the Sunset Strip still had an air of anarchistic magic.  Keith Moon was alive, nobody had any idea that drugs were anything but the answer, and my crotch was on fire.  I was twelve years old, under the influence of one-quarter of a Quaalude, and getting ready to lose my virginity to the eighteen-year-old redhead sitting next to me at the Rainbow Bar & Grill.

Understand that my father was the playboy kingpin on this West Hollywood landmark, and it was his girlfriend and his permission he had just given me on this historic night.  I was completely enraptured by the feminine essence of this fully developed goddess.  God bless her, she treated me like a prince.  I will never forget you, Kimberly Smith.

Having a semi-mania-cal womanizer for a father had its advantages and disadvantages.  On the positive side, I was frequently surrounded by a diverse selection of super freaks, including a healthy congregation of nymph like maidens.  On the not-so-positive side, my father’s steady turnover of women desensitized me toward wanting to attain true love with a single partner.  Nevertheless, the perverted complexities of my libido were unraveling at a helter-skelter pace.  My bountiful exchange of sexual affections seemed particularly impressive in comparison with my friends’ at this time.  With my not necessarily warranted sense of self-confidence, instilled in me by my father, I was constantly attempting to unite with a woman.  Fortunately, I was given a reprieve from this quest at the age of seventeen, when I fell in love for the first time.

Her name was Haya Handel, and she was my high school sweetheart.  For the next two years, I experienced wonderful sensations of warmhearted contentment with her.  Sadly, as is often the case, my first love crumbled, and I was quickly tossed back into the sea of fish.  I had come to realize that it was true love that I desired and not just a never-ending succession of orgasmic encounters.  I would, however, graciously accept that succession in the interim.

Struck by lust in a telephone booth

Busted by a cop, he said that’s uncouth

He said he could hear my baby

Screaming to me – fuck me Anthony, Anthony – “Special Secret Song Inside”

At the age of nineteen, I said “Fuck you” to university life and could be found punk-rocking my way through the insidiously twisted streets of Hollywood.  I was quenching my lust for life on more levels than I want to remember; certain lessons of lowbrow gluttony would be more painful to learn than others.  But the frequency and quality of my sweet-and-sour sexual interludes left me without cause to complain.  There was so much to love about getting busy: the romance, the challenge, the kissing, the touching, the licking, the sucking, the smelling, the tasting, the rubbing, the humping, the biting, the scratching, the sweating, the holding, the warmth, the friendship.  My sex life was rocking and I was happy.

Then one day in 1985, a remarkable accident permanently and profoundly altered the fantasia-like course of my life:  I became a member of a four-man band called the Red Hot Chili Peppers.  Because I had never intended to be a musician, I had never pondered the multitude of elements that came with the territory.  Fate had not only handed me a new purpose in life, it had done so in such a way that I had no preconceived delusions of grandeur.

My brain was in a state of cosmic blossom, but my sex life wasn’t yet undergoing any miraculous changes for better or for worse.  For the next three years, the Red Hot Chili Peppers carried on in relative underground obscurity.  We would get in our blue Chevy van and travel from town to town, and when fate would see it straight, I would sample the local delicacies of the land.  But when meeting young, healthy girls on these early road trips, we had no pompous pretention of “You should fuck me because I’m in a rock ’n’ roll band.”  It was more like: “You’re here, I’m here, you feel good to me, I feel good to you, we’re both horny, so let’s make each other happy right now.”  So we would.  The ever-.preposterous presence of groupies galore had not yet swooped down upon us like so many seagulls on a single crumb of bread.

During these years, AIDS awareness was almost entirely nonexistent, and blissfully promiscuous attitudes prevailed.  Nobody thought about slipping it on before slipping it in, which we all now know is a must if you are in nonexclusive relationships.  Safe sex through abstinence is a joke.

Is a function of lust

Each into the other

From her snow-white throat

In which two bodies float

A fanatic by choice

Aromatics is the flower

She must be moist

A bizarre and sometimes unpleasant pop-culture phenomenon occurs when the public is exposed to entertainers through mass-media formats such as television and magazines.  The objects of their affection become just that: larger-than-life, yet dehumanized, objects.  I feel lucky and grateful when people let me know that they are touched by the music that we play.  I feel uncomfortable as hell when people act like my sensations and emotions are more important that their own, because they are not.  Sometime in the late ‘80s my band reached a state of media popularity that caused some people to treat me with this type of distorted behavior.  People often thought that because they had seen me on television they know who I was.  They had stereotyped me into something I wasn’t.  Without my consciously understanding it at the time, the way women related to me (and vice versa) was changing.

Open your legs to the sensual sound

I can smell your nooky

Feel the bass, hump the ground

As you drop to your knees

And I come unbound

Now you make your mouth get on down

Recently, I was standing on the curb in front of Canter’s, an L.A. deli that hosts teenage rampages on Tuesday nights.  It was around 3:00A.M., and the air was beautifully clear and tasty.  I was getting ready to cross the street when a young lady scooted up to me.  She was wearing a well-filled push-up bra, had blonde hair and big, delirious blue eyes, and emanated a woozy urgency.  Without any introduction or salutation, she blurted out a question: “Do you prefer blondes or brunettes?”

Feeling a tad uneasy, I answered, “Redheads.”  Not discouraged in the slightest degree, she wasted no time to informing me of her sexual fantasies, all of which she had generously included me in.  Her offer to act them out was kind, but I replied with a smile and no prurient interest.  Saying good night, I walked across the street to Damiano, an Italian restaurant.  Ironically, moments before she approached me I had been contemplating the powerful waves of horniness that were surging through my brain.

Seven years ago, such a proposal might have resulted in immediate physical combustion.  In the present, I am not even momentarily inclined to participate.  In this instance, not only was the challenge unceremoniously removed, but I was left feeling awkward, knowing that she wanted me only because I’m famous.  This, my friends, is the number-one turnoff for me.

Please don’t get the impression that I don’t have completely reasonable female friends, because I do, and I love them.  I am using an extreme example, of which there are too many to mention.  The common stereotype of a male rock ‘n’ roll celebrity is that he is a mental midget, without and other interests in life than loud music, who is host to a never-ending bevy of bimbos who are kept solely for the purpose of noncerebral gratification. Though I do not see myself in this light, I have—on too many occasions to remember – succumbed to uncontrollable urges with women who I am not mentally or spiritually awed by.  (I am sure that this lack of awe was often mutual.)

The combination of reality and untrue stereotyping has left me in a fucked-up predicament.  Like millions of other of folks, I truly long for the perfect monogamous relationship.  My desire to share the experience of living with a female partner is overwhelming.  Having been in love before, I am well aware that it comes with pain as well as pleasure.  My disadvantage now is that women I think are right for me are now generally put off by my not entirely deserved status as a rock ‘n’ roll slut.

Mind you, this does present a new and partially intriguing challenge, but I sometimes think I would be well advised to go to a remote corner of the globe to find my wife.  I would gladly give up my wandering sexual energy for a warmhearted bond of emotional and sexual companionship.  In the meantime, I will contentedly focus all of my energies on the other aspect of my life that I hold sacred, music.

With the golden crotch

But let me tell you little boy

Despite the seemingly confused state of my sexual affairs (an issue I find strange and feel somewhat uncomfortable analyzing), I do consider the world of sex one of the most powerful and captivating aspects of human nature.  Journalists, fans, and other miscellaneous knuckleheads have often accused me and my lyrics of being overly preoccupied with sex.  To me, sex is an essential and obviously natural topic to express in one’s chosen form of art.  To deny this expression is an act of self-repression.  Those who look and listen more closely will find that there are a multitude of topics addressed in the lyrics, music, and attitude of the Red Hot Chili Peppers.  But do not expect the sexual freckles of my art to fade away, because as long as my dick is hard, so too will be the life that I lead and the music that I play.

Anthony Kiedis is lead singer of the Red Hot Chili Peppers, whose most recent album is Blood Sugar Sex Magik.

4 Responses to 1992 July Details for Men