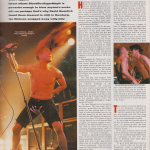 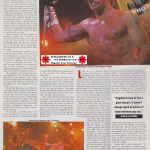 Hamburg’s Reeperbahn is not the home of subtlety and delicate seduction. Beneath garish posters of women in their underwear, all smiling in an unhinged manner, grinning men in horrible brown leather jackets shout rudely at passers-by. There are signs and billboards everywhere. HOTEL SEXY! screams one sign. NAKED GIRLS! screams another. A third, more ambitiously, bellows: REDBLOODHOTSUGAR-CHILISEXMAGIPEPPERS!

It is, perhaps fortunately for the people of Hamburg, a poster advertising the appearance of top punk funk metal groove New Age flashers The Red Hot Chili Peppers, in the copious Docks Club, itself on the Reeperbahn. Outside the club, crowds are forming early. Inside, the Chili Peppers are ploughing through a soundcheck in the usual rambling, loud, unmixed way that bands do. Singer Anthony Kiedis has his fingers in his ears, bassist Flea conjoins in nightmare rhythm with drummer Chad Smith and guitarist John Frusciante practises sticking his cigarette on the end of his axe. He is very good at it.

Photographer Ian Dickson and I approach the Peppers as they lay down their bloody weapons and head for a large buffet, which is spread out in a bar full of plaster cherubs. In the corner, support act Henry Rollins of The Rollins Band grunts from behind a screen as he lifts weights. The Peppers sip coffee and study menus.

The Red Hot Chili Peppers were formed in the early ’80s as a bizarre mix of screaming hardcore punk rock and the less coherent stompings of the Parliafunkamentadelic axis. Curiously, the fusion worked extraordinarily well and now, with their fifth and best LPBloodSugarSexMagik, the Peppers have become an awesome rock dance funk beast. From the five-hour long title track to the sensitive ballad ‘Under The Bridge’,BloodSugarSexMagik is a mighty record, full of joy.

The band themselves are less joyous this afternoon. “We want some time to ourselves,” grunts Flea to us. John shakes hands and says nothing then or later, Chad is jovial and Anthony says we can talk after dinner. So we wait and watch The Red Hot Chili Peppers eat their dinner. Every so often, Flea appears to shout “George Michael shaves his bottom! What a faggot!” and Anthony engages in selections from the Monty Python ‘spam’ routine. Then he comes over, chewing on something disgusting-looking. “This is a 22-year-old ginseng root that I bought in Amsterdam…” he reveals revoltingly.

Health is a big thing for the Peppers. Their LP sleeve boasts pictures of them being appallingly muscular. ‘I do some health stuff, yeah. I can’t play unless I stretch and I’m a terrible stretcher,” says Anthony mysteriously. “I take lots of ginseng and crazy Chinese herbs and gecko tails and so forth.”

Yeuch. The Peppers are—live, on record, in the flesh—a somewhat physical band. They always seem very pre-pared to talk about their bodies. “To me, it’s like a human being—you’re physical, you’re mental and you’re spiritual and to ignore any of them would be a mistake,” declares Anthony, flexing a muscle idly. “You know, a lot of people just get into the brain, which is cool, but then they miss out on the whole pleasure of the body. To me, athletics are as admirable as literature or art. Woody Allen once said the brain is the most over-rated organ of all…”

The Peppers achieved a degree of fame via another over-rated organ when they toured their Uplift Mojo Party Plan LP and encored every night wearing nothing but one sock each—in a place where a sock should not be. “Um,” says Anthony. “Well, we used to do the socks performance and that made perfect sense to us and it was a lot of fun. A good joke—and it felt great to be onstage naked, playing music. But we did that al-ready and we’re kind of not doing it any more because it got to a point where people expected it and they talked about it so much they kind of missed the point of the music.”

This reticence is unusual. Kiedis’s lyrics are frequently composed of somewhat over-strenuous tributes to what he is going to do with his genitals, and though some folk find songs like ‘Sir Psycho Sexy’ a tad vexing, Kiedis revels in his untrammelled sexuality.

“It’s just a large and beautiful piece of life that we choose not to ignore in our music,” he declares placidly. “We don’t see any reason to hide from that aspect of human nature.”

Every aspect of human nature can be found in Hamburg. Over the mighty rock roar of the soundchecking Rollins Band, we contemplate our host town. “I’ve been to Hamburg many times. Hamburg’s OK,” says Kiedis.

“It’s got a pretty high sleaze factor as far as German cities go. It’s got the Reeperbahn, which is gambling and prostitution and decadence, but you kinda get bored with that pretty quick. The first coupla times I spent some time in the Reeperbahn, but I don’t get off on that now. It’s kinda fun to window-shop and see what’s around.” Anthony stops.”Is this a German article?” he asks. “Germany is not my favourite country in Europe but, then again, neither is England. I just find both countries kind of unappealing, sort of bland and not that warm and welcoming. I feel much more comfortable in Holland or in Paris, I’m not sure why.” Anthony searches for le mot juste and finds it in a bakery. “England is kind of like a giant biscuit, it doesn’t change much in texture or taste wherever you are. Though I always look forward to rocking there, that’s one thing, especially in places in London. It’s good to rock the fuck out there.”

Which is what is about to happen in Hamburg. Punters start coming in and the band go back to their posh hotel for a nap. Ian and I venture out into the Reeperbahn and, with an aptness bordering on the spooky, have a hamburger. We rejoin the band as Henry Rollins takes the stage.

In the crowd, Flea watches a few numbers appreciatively, then returns to the dressing-room, presumably to have more time to himself. Chad is more genial; we have a pleasant chat about Elvis. “I went to Graceland” he drawls. “It’s kind of small actually. You can get any kind of Elvis stuff there—I got some toothpicks that have the letters TCB (taking care of business) written on them.”

The splendid women from the catering company Eat To The Beat initiate a discussion about Queen. Chad seems horrified to learn that Brian May is going out with Anita Dobson. “I’ve heard of Eastenders” he says, rolling his eyes in horror.

The Rollins Band storm on, brilliantly. The Peppers have booked themselves a hard act to follow, but they seem unconcerned. They have The Funk. Anthony elects to tell me the story of The Funk. “It was an accident,” he insists. “We were young men living in Hollywood in 1982 and we started getting hip to bands like Defunkt, Parliament, Funkadelic and James Brown. There was a direct connection to your gut.

“It was such a powerful music to listen to or dance to or have sex to, it just kinda seemed like an inspirational thing to create. We stumbled into playing it and it came naturally. Not unlike a bowel movement.

“We’ve had all kinds of positive reaction. We did our second record with George Clinton, who’s sort of the master of psychedelic funk, and he was com-pletely into us and wanted to work with us. So that was an honour. The entire Parliament/Funkadelic mob are definitely into the Chili Peppers, their whole entourage of singers and musicians…

“The current LP was produced by the man who, it can be said, is Not Funk: the eminently Satan-bearded Def American boss Rick Rubin. No Clinton he, Rubin is now better known for allegedly being a big fan of pentagrams and signing the Black Crowes than for being the master-mind behind earlier acts on the legendary Def Jam label, such as LL Cool J and The Beastie Boys.

“Little bit of a contrast there. I couldn’t even begin to compare Rick Rubin and George Clinton.’ agrees Anthony. “The similarity is they both love music and they both dedicate their lives to making music. Rick is kind of more the mellow laid-back contemplative chess-player of a producer; he doesn’t make a lot of unnecessary moves. He was really comfortable to be around… When I first met Rick, I thought: No Way can we work with this guy, he’ll probably want to boil a goat head in the control room’, but he’s not like that. That’s more of a joke than anything else.”

Rollins and his merry men have exited to a hail of applause, so Anthony returns to his dressing-room to do what-ever bands do before shows. When the Peppers finally take the stage, to a hall of more applause, they are pretty good. Loud, spunky, sparsely-clad, kings of metallic funk. Flea introduces Chad’s drum solo by invoking the name of ‘Magic Johnson! Magic Johnson” Anthony walks on his hand& John riffs like a maniac, switching from metal wailings to total JBs-style rhythm chops. A song called ‘Myrtle [sic] The Turtle’ unrolls itself insanely through the amps and goes on and on at such increasingly funky and uncontrollable length that the band are probably still playing it in another dimension. ‘Under The Bridge’ induces much arm-waving and swaying.

The whole thing is extremely rocking, ending magnificently with a serious hammer through Hendrix’s ‘Crosstown Traffic’, a song as good as written for the Red Hot Chili Peppers. The band crash to a halt and return backstage. They are rock’n’roll! Except they appear to be going back to the hotel for a sleep now. Flea appears, his pockets crammed with sandwiches. “I couldn’t eat a thing; he says, looking wired. “I’d probably throw up…” He sighs: “All the years, all the tears,” in a mysterious fashion, then ambles buswards. Anthony strolls by and shakes hands. Was that fun? Is all of this fun? He nods. “Always. A tour is the kind of thing that puts you through the ulti-mate grinder of life, but it’s beautiful. It’s so difficult and so trying and it’s such a test of strength for you to have to go out there on the road and do this night after night after night. And we give it 100 per-cent every night.”

Kiedis rubs his torso reflectively. “The sign of a good show is usually injury, which I got last night, a bruise on the rib from freaking out in the middle of a song. So it’s beautiful and I feel completely fortunate and lucky to be able to do this with my life, but it’s also a small mobile torture chamber.”

Anthony smiles. “I couldn’t ask for anything more…”