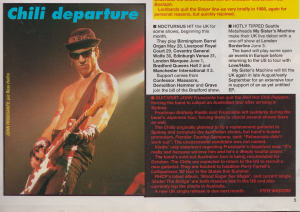 (I know! It’s a photo of Anthony Kiedis and not John Frusciante but I’m only scanning what was in the magazine so please don’t shoot the messenger

Guitarist John Frusciante has quit the Red Hot Chili Peppers, forcing the band to cancel an Australian tour after arriving in Sydney.

The Chilis originally planned to fly a replacement guitarist to Sydney and complete the Australian shows, but band’s Aussie promoters, Frontier Touring Company, said: “Rehearsals didn’t work out.” The unsuccessful candidate was not named.

Kiedis’ only statement regarding Frusciante’s departure was: “It’s really sad because we love him and he’s a deeply soulful player.”

The band’s sold-out Australian tour is being rescheduled for October. The Chilis are expected to return to the US to recruit a new guitarist. They are booked to headline Perry Farrell’s Lollapalooza ’92 tour in the States this summer.

RHCP’s last album, ‘Blood Sugar Sex Magik’, and current single ‘Under The Bridge’ are both massive hits in the US and also currently top the charts in Australia.

A new UK single release is due next month.