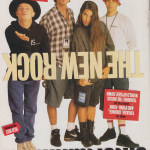 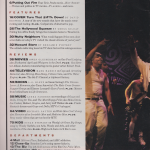 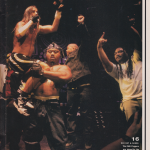 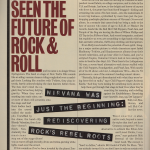 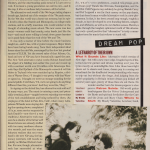 Despite being on the cover for this magazine; RHCP as a band is only mentioned a couple of times in passing and there is one Anthony Kiedis quote although there is a good photo of him on the index page (therefore, I haven’t bothered to type up the rest of the article – people can read the rest by zooming in on the scans if they want too; there was a two page introduction to the new music scene and then a couple of pages detailing up & coming bands which never seem to have been heard of again -apart from the Chili Peppers- if I’m anything to go by!).

BTW the photo cover IS upside down (article is about new bands turning music on its head- bad pun!). For RHCP fans, this cover is unusual because it’s one of the few to feature Arik Marshall in the band.

“Basically, kids got disenchanted with what they were being force-fed on radio,” says Chili Peppers singer Anthony Kiedis. “And they were looking for something more sincere to help them get through that stage in their lives when they’re searching for meaning and rebelling against the Establishment. Something more heartfelt, than, say, Def Leppard.”