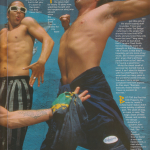 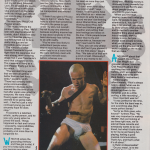 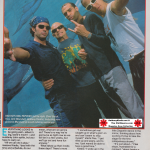 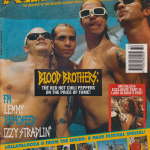 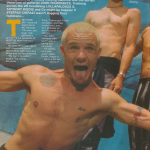 THE HOME BOY looks not too dissimilar to MC Hammer. “Oh wow, you guys, mah girlfriend’s gonna f**k me senseless fo’ MONTHS when I tell her I seen YOU…”

He takes off at high speed and immediately bowls Warner Bros A&R man Larry White over on the pavement.

“My man’s CLASSIC!” laughs Flea, loving the whole thing.  “Gonna get f**ked senseless and then runnin’ into Larry… he’s probably on his way home in a HURRY.”

“C…can I converse with you?” asks a young man nervously.

“Of course, let’s pow-wow,” sighs Kiedis, happy to talk to a fan but weary of being approached with such reverence. Another guy comes along with his infant son, and takes the band to sign the boy’s clothing.

“I feel like a President!” giggles Flea. “Kiss that baby!”

More passers-by congregate at the end of the block whilst the photos click away. The Red Hot Chili peppers have arrived pretty much everywhere, and as they’re the first to tell you, it’s down to the music cos they never had a massive plan.

“There’s nothing else to it,” sighs Flea. “We just love the music, have fun doing it, playing it, feeling it. There’s no big plan, and there never really has been.”

Thing is, they’ve been looking at the gravy train for nearly 10 years now, watching its path and the hangers-on who jump aboard when the going’s good. They’ve waited for it to leave the station, and now they’re gonna enjoy it.

“Of course you get little girls at the airport saying stuff to ya like, ‘I love your album ‘Under The Bridge’ (referring to the single that shoved the band into MTV-land), and you know they only know that one f**king song, but what’s so bad about that?” laughs Chad Smith, the ever-friendly tower of strength on the Chili drums. “All it means is that they’ll hopefully get into more of our music. But is there pressure? Am I angry that’s all those people know us for? Hell no, I’m having a good time.”

Whilst the sweet smell of success has burned many a mind, it isn’t about to happen with the Chili Peppers. Too smart and too many years in the wonderful world of music. You won’t find a single complaint here from anyone. As Flea says, “Success basically means money- and I have no aversion to success.”

BUT FOR the Red Hot Chili Peppers, the route to ‘world’s hottest band’ status didn’t come quickly or without pain. The years of slog, in clubs, in vans. The tragic death of Hillel Slovak, and recently the abrupt departure of guitarist John Frusciante. In Arik ‘The Freak’ Marshall, they’ve found a very able replacement, a man whose experience and love of the groove, as well as his easy-going manner, make him a perfect Chili pepper.

“I figured these guys were gonna check me out,” he drawls, comfortably settled on a hotel sofa. “We’ve always know each other; the guys would come and check out my old band (Marshall Law). It’s all about the music. You just come in with your vibe and put it on the table. Work into things, jam. We all love to play, it’s really that simple.”

“The music reflects the person,” sums up Flea. “We’d seen Arik playing around for a while, didn’t know him very well but liked his playing- and he’s turned out to be a really nice guy and an incredible guitar player.”

The rumours of what caused Frusciante’s quick flight from the Japanese tour were strong, most involving drugs, but it was Frusciante’s mind that collapsed on him. The pressure of living as a Chili pepper finally got too much.

“The weirdest thing was that we were all getting on better than we had for a while,” explains Smith.  “There had certainly been some communication problems in Europe, but it seemed like the time off we had after Japan was good for everyone. We were really flowing again and things seemed to be going really well… I feel he’s just a very confused young man and I sincerely hope he does okay.”

Frusciante’s a talented, artistic, quirky person, and he was very young when he joined the band. Things happened so fast and furious – popularity, responsibilities, pressure, stress- it was probably a lot more than he bargained for.

WHICH IS where the grounding that Anthony and Flea got is vital, of you’re to keep sane when you become pop stars.

“I guess so,” Kiedis sighs. “That’s all part of the foundation that Flea and I have because we’ve been doing it for so long. We did those Chevy van tours for years, and I suppose it does make it easier to climb that ladder of musical popularity.”

Did it make you evaluate yourselves, thinking you might have been pushing him?

“I never blamed myself for John quitting. I didn’t really think of it like that at all.”

Of course, with fame and fortune come showbiz, glitz, media hype and misconceptions. How much are the Chilis looked at like a commodity, a two-million plus-plus product that can be manipulated and whored over?

“I think if you give a f**k you have to fight it,” starts Flea. “I have to admit that some things in the press do get under my skin, but overall I try not to pay any attention because anything anyone has to say about anybody in this band obviously has nothing to do with reality.

“You’re even less likely to understand people when they’re more famous than when they’re on a lower level. We were definitely dealt with on a more intimate basis before, whereas now, everything you say is made out to be this big statement. To let what people think about us affect us one way or another is extremely unhealthy.”

When you go into meetings with the record company these days, do you have to fight to be seen as more than just sales figures?

“I don’t even think about that kind of stuff,” says Kiedis. “It isn’t gonna have any effect on us- when we sit down to write the next record we won’t be thinking about Warner Bros, we’ll be thinking about Flea, Arik, Chad and Anthony getting together and putting their best feelings and ideas n the line. I think people know better than to try to manipulate us, because we don’t react well to that.”

“Plus, you can only phase that stuff out if you phased it in in the first place,” laughs Flea. “We take all of that with a pinch of salt. Obviously if there’s any money to be made we’re gonna get what there is to be made- we’re not gonna sit back and let someone make money off us- but I couldn’t give a f**k about that stuff. When you think of success, all that actually means is making lots of money, right? It’s money!”

“Selling records isn’t ALL about money,” Kiedis disagrees. “Making money is obviously a very powerful by-product of it all. But it’s also about people paying attention to your music.

“When you first start playing music that’s what you want, for people to pay attention to it. You don’t just play for yourself, you play it to show people what you do, and to me that’s another beautiful thing about selling lot of records. Making money is cool, but you always want people to know what you’re dong, and now we’ve got the attention of the world focused on the music that we make.”

And what about that music? ‘Blood Sugar Sex Magik’ is a groovier, bouncier Chili Peppers album than anything that had gone before, and I wondered how much that had to do with Rick Rubin’s involvement.

Kiedis laughs affectionately. “Rick’s always talking about ‘when we do that next record I think we should go down to the Bahamas and do a little surfing, a little recording’…”

How important was he?

“As far as Rick goes, who knows?” furthers Fleas. “He was very important in making ‘BSSM.’ But just looking at our lives right now, we’ve sold all these records and everyone wants to be our friend, but what it boils down to for me is just having fun playing, having a good musical communication. That’s fun, and that’s what it’s all about.”

“Do you mean, is he the fifth Chili Pepper?” asks Kiedis.  “He’s got his dick in so many different stews it would be impossible for him to commit that time and energy, apart from which, we don’t want that ourselves, especially when we’re out here on the road touring.”

EVERYTHING LOOKS to be going well- album’s big, band’s movin’- and suddenly John splits, but you have to carry on.

“All we can do is play,” reasons Kiedis, “deal with the time and schedule, do our best under the circumstances. Fortunately we’ve got Arik, who smokes like a madman on guitar. You just play on through that and make it happen. We all do have a great desire to rock and have fun.”

“F**K it!” chuckles Flea. “I mean, what are we gonna do? There’s no way we’re gonna be as tight now as we will be in a few weeks, but we’ll go out and have fun anyway.”

What takes up their minds these days? There’s more room to sit and reflect now, so does it lead to paranoia, the fear of losing it, that usual big star dread?

“I sometimes get real caught up in what’s goin’ on and I can’t seem to stop myself,” starts Flea. “I get riled and angry, and to me, I just wanna be able to have a good time.”

Kiedis: “I woke up on the middle of the night the other night. I was naked, I put on my sunglasses and a Led Zeppelin record and I did a little Zeppelin dance in the mirror, thinking about how exciting it’d be to take the stage for the first Lollapalooza shows.”

“It’s just about…” Flea stops, frustrated for a moment, “about having a good time. Playing music is what I do, it’s what I love to do, and I wanna play it and get better. And have FUN…”

Don’t doubt the sincerity of a man who wears only underpants with a flame-thrower on his head in front of 18, 000 people.